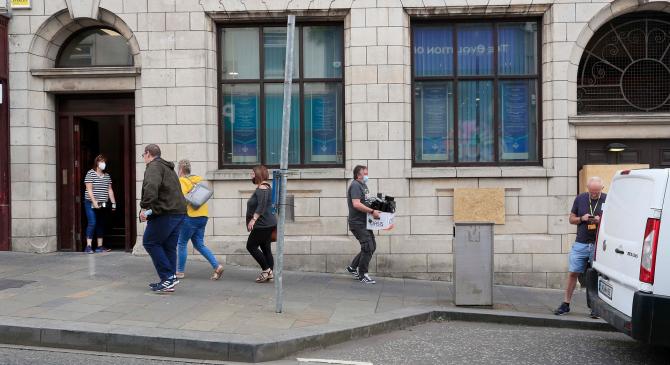 BANK customers in Tyrone have been left reeling after a Dungannon bank shut its doors last week and a separate Ballygawley bank revealed it would be closing up in three months time.
The Bank of Ireland, at Scotch Street, Dungannon has shut in a shock move, while Danske Bank, at Main Street, Ballygawley, has announced that it is to close in October.
The Bank of Ireland has been trading in Dungannon for almost 50 years.
The Bank closed its doors on Thursday last and bank staff began clearing out the Scotch Street property as customers called at the bank to carry out business.
One local man, immediately went to the Courier office, just few doors down the street and said he was shocked at the move.
“I went to the bank to make a transaction only to find staff carrying equipment from the building. They informed me that the bank had closed, which took me by surprise.
“I had heard rumours of a possible closure of the bank by the end of the year, but that was it. The Bank of Ireland seems to have blanked loyal customers by this closure and it is a very sad day for the Bank of Ireland and for Dungannon.”
The Courier reported back in January that the Bank of Ireland was considering branch closures. The Bank of Ireland - which has outlets in Dungannon, Cookstown and Omagh and 28 branches in Northern Ireland - declined to confirm reports at the time.
At the beginning of March, the Bank of Ireland announced it would close 15 branches in Northern Ireland, more than half of its 28 branches in the Province.
A Bank of Ireland representative said it was part of a wider cost cutting exercise which would shut over 100 branches across the island of Ireland.

Full Story in this week's Courier