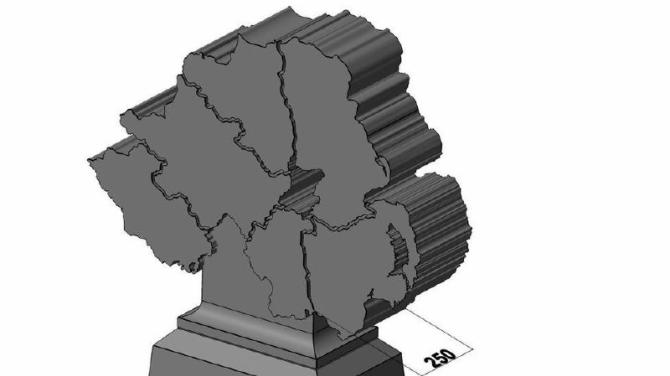 How the centenary stone at Stormont would have looked. Sinn Fein vetoed the proposal because it “reflects only one political perspective”. SC212640

MID-ULSTER District Council has voted against a proposal to send a letter to Stormont calling for the erection of a stone marking the centenary of Northern Ireland at Parliament Buildings.

The proposal was brought forward at meeting of Council on June 24.

Councillor Ashton’s proposal was defeated with 19 votes against and 18 in favour.

In January, the DUP, TUV and UUP wrote to Stormont’s speaker, Alex Maskey MLA, requesting the erection of the stone on the grounds of parliament buildings.

It is understood the stone would have been paid for by the three parties and the proposal had the support of the Alliance Party and the SDLP.

However, Sinn Fein vetoed the proposal on the grounds the stone had been “designed and commissioned by representatives of one tradition”.

Speaking at June’s council meeting, during a discussion on correspondence received by the local authority, Councillor Kim Ashton called on Council to support Ards and North Down Borough Council’s campaign.

“I had raised this issue last month but unfortunately it was not accepted,” said the Dungannon councillor.

“In relation to correspondence from Ards and North Down Borough Council I would propose that we support its proposal to write to the speaker of the Assembly and call for the reversal of the decision not to permit a stone sculpture to be placed at Stormont to mark the centenary of Northern Ireland.”

Councillor Sean McPeake said he would not be in favour of the proposal.

“I understand what has been said and I also spoke on this issue last month,” said Cllr McPeake

“I would not be of the view that we support this request.

“It should be dealt with in the Assembly and by the relevant commission there and I don’t think we should adhere to that request by Ards and North Down Borough Council and I propose we don’t.”

Councillor Walter Cuddy said his party would support Cllr Ashton’s proposal noting “it is very important we try to respect all sections of the community”.

The matter was then put to a vote with Council’s Chair, Councillor Paul McLean explaining he would take Cllr Ashton’s proposal and if it was defeated that would signal support for Cllr McPeake’s proposal.

Cllr Ashton’s proposal was defeated with 18 votes in favour and 19 votes against.

The 18 votes in support of the proposal came from the members of the DUP, UUP and SDLP present while the 17 members of Sinn Fein present and the two independent councillors, Kerr and Montieth, voted against the proposal.