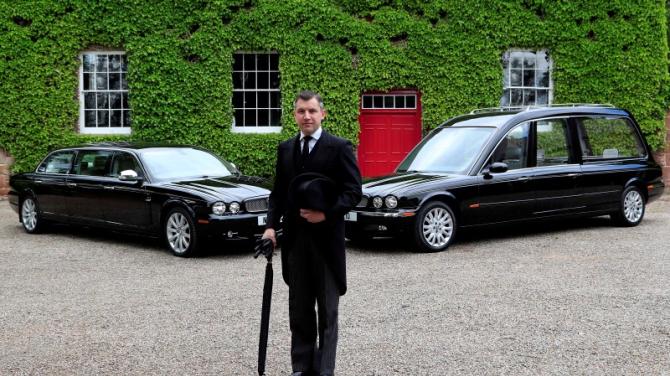 THIS month Holmes of Dungannon celebrates 75 years of service to the people of Dungannon and the surrounding villages and towns.

Holmes Bros, a partnership, was formed when W.R. (Bob) and R.N. (Richard) Holmes acquired the old established business of W.R. Irwin coal and General Merchants, petrol and undertaking, which were the focus at that time.

In 1950 R.N. Holmes relocated to Tyrone House (then John Street, later renamed Ballygawley Road) and concentrated on funeral services. W.R. Holmes remained in the original premises on the same road.

Something quite unusual at that time occurred – R.N. Holmes incorporated the business of James David and began to focus on both funerals and memorials. This significantly widened the area where Holmes were called upon to serve.

W.R. Irwin, the previous owner, was renowned for providing a high-quality service, an emphasis which has continued ever since, 75 years on. R.N (Richard) qualified as an embalmer in 1949 and the business became a member of the prestigious National Association of Funeral Directors.

Upon leaving school, Leslie (son of R.N. Holmes) trained for the funeral business with James Brown & Sons, Newtownards Road, Belfast and qualified as a member of the British Institute of Embalmers in 1969. Leslie continued working in Belfast and then gained further experience with Doggart & Sons, Newtownards. Leslie also gained a highly recognized qualification with a Diploma in Funeral Directing.

In this 75th celebratory year, a new and exciting chapter has begun – the business has returned to local ownership.

David Cranston, the new owner had previously been involved with Holmes of Dungannon, working part-time with them for several years. During this time, his interest in the business increased. His full-time work was in a local plastics company and he gained invaluable experience in senior management both at home and in America, where David and his wife Emma worked for a few years. Whilst in America David got to know a funeral director and gained some voluntary experience in his spare time, in particularly the area of embalming and care of the deceased.

In 2019, David andhis wife Emma commenced trading as D Cranston, Funeral Director in Moy and will continue to trade in the Cranston name there separately, serving the local district. Their office is located at 13 Main Street, Charlemont, Moy.

Following the acquisition of Holmes of Dungannon, David told the Courier he would continue to serve the Dungannon community and further afield. He is pleased that Leslie has agreed to continue his involvement.

David has known Leslie for many years; both are well known and respected locally and strive for excellence in all that they do.

Under the ownership of David, Leslie will continue to serve and is delighted with the recent acquisition and looks forward to enhancing the rich history and tradition which has been established over the past 75 years. Leslie stated: “I am very pleased that David has acquired the business and I am very certain that he will continue the service to a very high standard. I am also looking forward to working with David in continuing to help local families as they make arrangements at a very difficult time. ”

Just like any business, Holmes of Dungannon has adapted to change within the profession over the years. Leslie explained how the role of the funeral director has taken more responsibility over the years when arranging all aspects of a funeral, particularly when it comes to the caring of the deceased, which previously was the duty of the local nurse. Today, this very important responsibility is carried out by the funeral director and is something Holmes of Dungannon is very proud to do, with the utmost professionalism and dignity which has been an integral part of their heritage over the years.

Other duties done by families previously, is now done by the funeral director. Nowadays donations to church or charities etc., are usual, with a family floral tribute only, rather than individual wreaths. More use of modern technology is needed today, especially regarding newspaper and online notices which is a widely used new concept. In this new era, David says that we must move and adopt to better ways of doing things.

Both David and Leslie are strong advocates of pre-paid and pre-arranged funeral plans. They know from experience the peace of mind that clients have, knowing the preferences and wishes for their funeral have been recorded, and their next of kin will have fewer choices and decisions to make when the need arises.

Stated David: “We have many clients who hold their arrangements and Funeral Plans with us and increasingly people are seeking to obtain information about planning a funeral in advance. Offering clients opportunity to pay for their funeral in manageable instalments is of great help, especially when it locks ever increasing costs at today’s price. This offers comfort and helps reduce the burden of loved ones having to make funeral arrangements both practically and financially, at what is often a most emotional and difficult time. It provides peace of mind through knowing all is being taken care of. This is something which I could not recommend enough, having your arrangements made. Increasingly, this is a vital part and focus of our service.”

David believes that the business, under local ownership, can build on the heritage of the past 75 years as it provide a prestigious service to local families that reflects personal family values.

He believes that when a client calls, they want to speak to someone local who knows the area, and they can trust to take care of all aspects of the funeral arrangements.

Holmes of Dungannon arranges and conducts each funeral with the utmost care, dignity and respect, being fully independent, having their own Jaguar fleet and unparalleled headstone and monumental experience which has been renowned Province-wide.

David told the Courier that the headstone side of the business is very important for families to remember their loved ones and that continuing the very high standard which has been set over the years, whether that be erecting new headstones and surrounds, renovations of older work, re lettering or adding new inscriptions, even to cleaning and tidying existing jobs, this is all part of the service Holmes provides.

David and his team are always available to speak to for help and guidance every step of the way, 24 hours a day, seven days a week.

Anne Simpson, who has been with the company over many years, is part of the office team and will be on hand to answer any queries with understanding and sympathy – hallmarks of Holmes of Dungannon.

For further information, contact David at Holmes of Dungannon, Tyrone House, 2 Ballygawley Road, Dungannon BT70 1EL. Appointments can be made by telephoning 028 8775 2212 or by email info@holmesfuneral
directors.com
.