Arrest after 10 litres of Cognac found 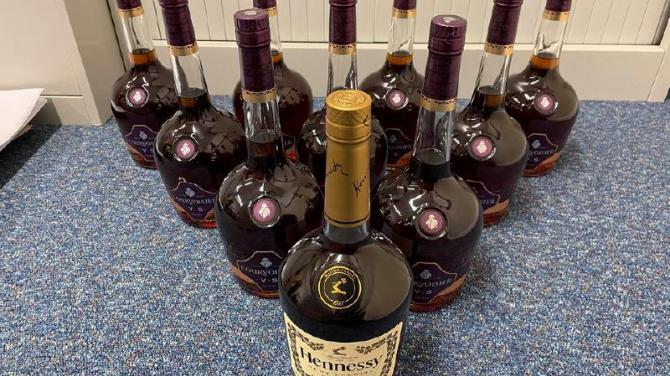 The seized bottles of Cognac.

POLICE alerted to a theft of over £350 of alcohol in Bangor say they found ten litres of Cognac hidden in a car outside Dungannon.

The vehicle was stopped on the M1 motorway near Dungannon.

A PSNI spokesperson from NI Road Policing and Safety said: “ANPR Interceptor Team officers were alerted to this vehicle which was suspected of being involved in the theft of over £350 worth of alcohol from a supermarket in the Bangor area.

“The vehicle was intercepted on the M1 motorway near Dungannon and one male was arrested on suspicion of theft and handling stolen goods after 10 litres of Cognac were found hidden in the vehicle.”

Meanwhile, police are warning the public criminals are posing as police officers.

The scammers have been targeting older victims by telling them someone would be sent to their house to collect personal belongings for an investigation.

Detectives from the PSNI’s Economic Crime Unit were made aware of a scam where members of the public were contacted by someone reporting to be an officer which resulted in these criminals taking a “substantial amount of money” from a victim who was told her belongings were needed in their investigation.