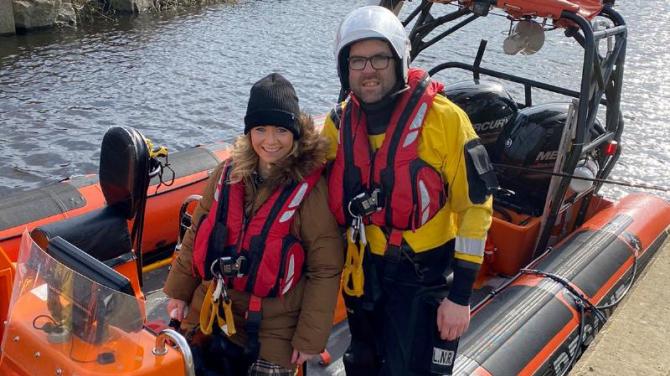 A Tyrone fitness fanatic who was involved in a dramatic rescue by the Lough Neagh Rescue team almost four years ago, has celebrated her 30th birthday with a fundraiser as a thanks to the charity which came to her rescue.

Lauren Toner, from Cabragh, was in a boat on Lough Neagh with her fiance in May 2017 when they got into difficulty.

Her fiance, Liam Teague, a member of Lough Neagh Rescue, called for help and kept Lauren calm until his LNR colleagues arrived.

An IT consultant for Moy Park, Lauren does a 6am workout each morning followed buy a walk or run before work. And it was her love of fitness which gave her the idea of doing something for the local LNR which came to her aid.

For her 30th birthday, Lauren has decided to take part in a fitness challenge of one workout per hour for 24 hours.

She will undergo the challenge at CrossFit BL, Dungannon with the help of owner and coach Stuart Lamb when the gyms reopen after lockdown.

Lauren told the Courier: “Around four years ago, on the 7th May 2017, myself and my fiance Liam got into great difficulty; just one mile out of shore on Lough Neagh.

“Liam’s boat began to take in water and five minutes later it sunk and we were both floating with nothing supporting us except our life jackets.”

Explained Lauren: “Liam is a crew member within LNR and until that day I wasn’t really sure what that entailed.

“However, Liam knew exactly what to do. Aware that the boat had started to take in water before he alerted me, his calm and professional nature allowed him to carry out the safety steps and procedures he had trained for with the Lough Neagh Rescue team.

“He rang the coastguard to say we were in trouble and kept me calm, assuring me that everything would be OK an that the LNR crew wouldn't let us down.”

Describing the dramatic moments, Lauren stated: “As soon as the boat sank, we were left to our own devices; to just wait and the minutes seemed like hours.

“Suddenly, Liam noticed our boat had hit an air-pocket and was floating, so we then made our way over to the boat and held on to a rope to try and keep us afloat.”

The couple had only been dating for a few months when the incident occurred, but Lauren said Liam kept her positive and laughing as they awaited help.

Within 15 minutes the Lough Neagh Rescue boat had arrived and Lauren says she could not have been happier. I thought I was going to die and was so grateful to see the rescue team arrive.”

Lough Neagh Rescue, which has crews in Ardboe, Kinnego and Antrim, was not aware that it was a fellow crew member in trouble.

“When the crew members pulled alongside us and noticed it was Liam along with myself, they couldn’t believe it,” recalled Lauren.

“We were taken across the lough to Sandy Bay, where an ambulance team was waiting to check us over. It was very professional and very reassuring and, thankfully, we only suffered mild hypothermia.”

Lauren said that over the following weeks she couldn't stop thinking about the incident: “It seemed very surreal that this had happened us and I found it very hard to take on board; but one thing that stood out to me was the tremendous composure and professionalism that these volunteer crew members have when attending emergency call outs.

“It made a great impression on me and still does. Over the past four years I have witnessed the work and dedication of the Lough Neagh Rescue teams ,who train night and day to ensure their skills are kept up to date and they are on hand to help anyone that gets into difficulty on the Lough or surrounding areas.”

To enable their continued training to take place requires funds and with the pandemic putting paid to any fundraising efforts during 2020, Lauren decided to come to their rescue – in a fundraising way!

“The statistics of 2020 indicated that there were 60 call outs in which all three stations and their crews were required. Each call out has a fee and every penny counts to ensure this organisation continues through these difficult times. So, to do my bit for the charity and as a way, however small, of saying a sincere thank you, I have decided, with the help of Stuart in CrossFit BL, to complete a 24 hour workout when lockdown ends. This will entail one workoout per hour for 24 hours.”

Concluded Lauren: “I felt extremely grateful for the crew at Ardboe for saving our lives and to mark my 30th birthday on 25th February, I felt it would be fitting to repay LNR by raising as much money and highlighting the brilliant work that they do.”