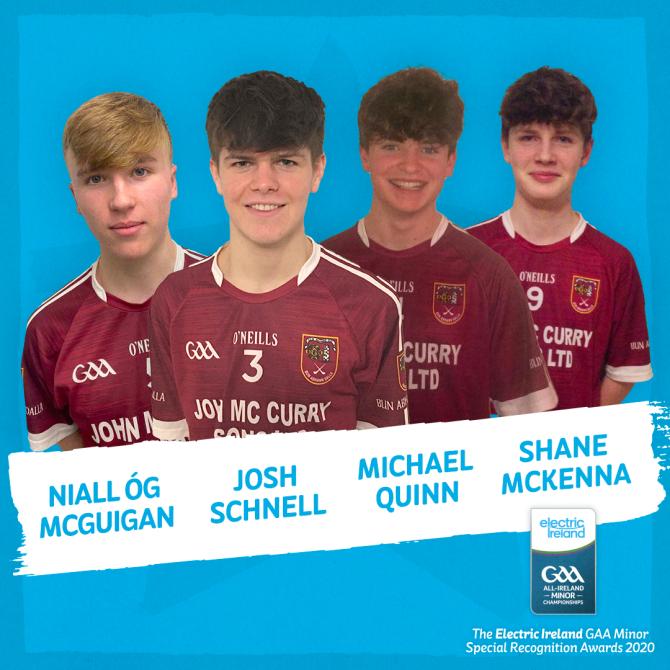 FOUR young hurlers whose bravery helped prevent a drowning tragedy on the north coast last summer have been honoured by Electric Ireland after being crowned Ulster winners of the 2020 Electric Ireland GAA Minor Special Recognition Awards.

Michael Quinn, Josh Schnell, Shane McKenna, and Niall Óg McGuigan from Ruairí Óg Cushendall GAA club received the award for their efforts in saving the lives of a young family who had gotten into distress while swimming on White Rocks beach near Portrush.

In June 2020, the four teenagers had been enjoying a day at White Park Bay when they noticed the young family had gotten into difficulty while in the water.

Thinking quickly and courageously, the boys rushed into the water and successfully prevented a certain tragedy.

Colm Cavanagh, 2004 All-Ireland winning Minor and one of the judges for the Special Recognition Awards, was on hand to announce the award recipients on Thursday morning.

“I was very proud to be on the judging panel for these Electric Ireland GAA Minor Special Recognition Awards," he said.

"All of these young men have shown incredible initiative and bravery, as well as maturity beyond their years, and they should be very proud of themselves.

"I am delighted that Electric Ireland and the GAA have recognised their efforts and the incredible impact which they have had on their communities in 2020. While we hope that they can get back on to the pitch soon, they have demonstrated what the GAA is truly about.”

Edel McCarthy, Head of Sponsorship & Brand at Electric Ireland said Electric Ireland was delighted to recognise the four young men with an award for their outstanding contribution to society in 2020.

"In what has been an extremely challenging year for all, and in particular this age group, these young men really stood up and made an incredible impact not only on the lives of those they helped, but on society," she said.

Uachtarán CLG John Horan congratulated the boys on behalf of the GAA.

"These awards showcase that the GAA is not just about what happens on the pitch, but that the community is at the heart of everything that we do," he stated.

"These young men are a credit to the Association, their clubs, their families, their schools and, most of all, themselves. We are delighted to support these Electric Ireland GAA Minor Special Recognition Awards and thank Electric Ireland for their continued support for this age group.”

It's not the first time the friends - all students at St. Killian's College - have been recognised for their bravery.

Last October, they were formally honoured by the mayor of Causeway Coast and Glens Borough Council, Alderman Mark Fielding.