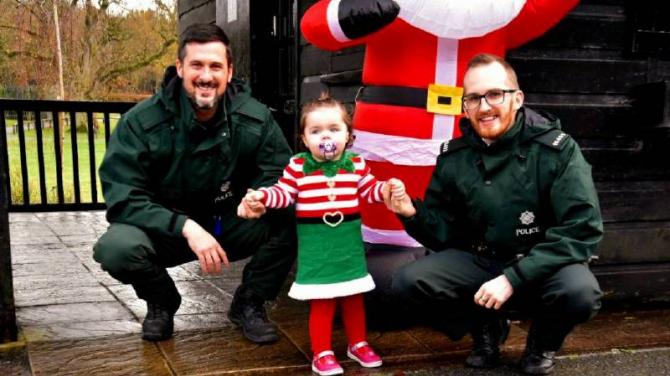 POLICE in Dungannon have come to the rescue of a local toddler.

“She immediately brought her to the gates of Dungannon Police Station where officers started working on her. Other officers went across to the ambulance station but with no ambulances or paramedics available the decision was made to take her to A&E at Craigavon Area Hospital.

“Constable Gibson drove an emergency run making rapid progress whilst maintaining contact with Craigavon Area Hospital via the radio and this ensured a full medical crew was ready for their arrival.

“Meanwhile Constable McClughan continued to work on Darcie in the back of the Police car throughout the journey whilst her Mum held her. By now Darcie was drifting in and out of consciousness and starting to turn blue.

“On arrival the crew ran Darcie straight in and were met by the waiting medical team.

“She was kept in overnight and received further medical attention and diagnosis.

“The quick thinking and actions of officers on the night saved Darcie's life, so they delighted to be reunited with her in more relaxed circumstances.”