SALE OF THE CENTURIES IN COOKSTOWN 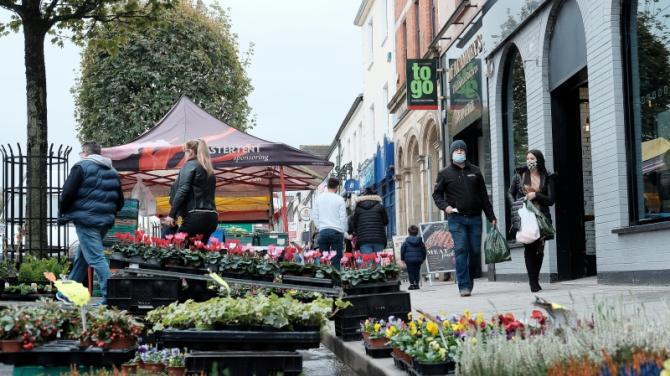 COOKSTOWN'S Saturday market – the oldest market in Ireland – is in the throes of being sold in what could be described as the sale of the centuries.

For 400 years the weekly market has graced Cookstown town centre after being granted to the town by King Charles I.

Now the Market Rights are up for sale.

An advertisement for the sale of Cookstown Market Rights has been placed in the Belfast Telegraph.

The advertisement offers a “unique investment opportunity to own market rights to long established Saturday Open Air Market in the hub of Mid-Ulster”.

The agents are Allens of Cookstown.

In 2018, the Mid-Ulster Courier reported that the old Saturday market were being considered for sale.

We reported in March 2018, that the local Council had expressed an interest in purchasing the Charter rights to the famous old market, which takes place on parking bays from Loy Hill to the Oldtown each Saturday.

The history of Cookstown's Saturday market dates back to 1628, when, following the Flight of the Earls, King Charles I granted Market Rights, under a Royal Charter, to Cookstown founder Dr Alan Cooke, permitting the holding of a free twice-weekly market for livestock and flaxen goods.

The Market Rights dating back to the 17th Century were acquired by Cookstown man Philip Orr in the early 1980s – reportedly for £1m - and the Council approached Mr Orr last year to say it was interested in acquiring the Market Rights through the purchase of the ancient Charter.

The matter was discussed at a Development Meeting of Mid-Ulster District Council in 2019, when Sinn Fein Town Councillor John McNamee advised that a delegation from Cookstown Town Centre Forum including himself and Mary McCullagh, Town Strategy Manager, had met with Mr Orr regarding the sale of the town's market rights.

Councillor McNamee said that he understood the former Cookstown District Council tried to purchase these previously, but Mr Orr indicated at the time that no discussions had taken place between representatives of the Council and himself.

Councillor McNamee said that Mr Orr had indicated he would make a decision on whether he wished to sell the market rights.

He added that Mr Orr had specified that he did not want to see the Saturday Market in Cookstown dying out and was keen to see the two allocated fair days starting up again.

Councillor McNamee said if the market rights were up for sale, the Council would have an opportunity of bidding to purchase them and the matter was left for consideration.

The matter was raised again at a meeting of the Council's Development Committee in December of last year, when Cookstown Market Rights members requested an update.

The Council's Development Committee was informed the Cookstown Regeneration Manager had been in liaison with Mr Orr who indicated the market rights were not for sale.

Mr Orr, however, noted the Council’s expression of interest in any future sale of the market rights and said he would not overlook such interest should he decide to sell the rights in the future.

Cookstown is famous for its old Saturday market which brings locals, tourists and investment each Saturday throughout the year and has even been described as the jewel in Cookstown's Crown.

Despite standing the test of time for almost four centuries, the market, like everywhere else, created its own piece of history when it was forced to close down for a period earlier this year due to the coronavirus lockdown.

Having continued on a weekly basis, despite two World Wars and the Troubles, the town's Saturday market was no match for coronavirus and as a result was halted for several months this year as the town battled Covid.

Instead of the bustle and banter as locals and visitors alike flocked to the plethora of stalls which are traditionally found along both sides of Cookstown's main street, the town centre and its footpaths on a Saturday were strangely quiet, but they have reopened again with business as usual.

The stalls and stallholders are regulars to the market each week and they attract locals and visitors alike who enjoy a walk through the stalls on Saturdays.

Locals will tell you there are bargains of all shapes and sizes to be had after a good old barter over the price!

That barter will now involve those interested in acquiring the market rights to the oldest market in Ireland.