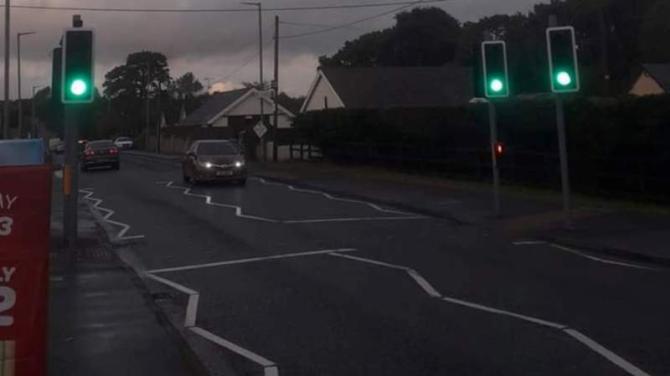 POLITICIANS have welcomed the installation of a pedestrian crossing on a busy road in Clonoe, a village near Coalisland.

The introduction of a pedestrian crossing on the Moor Road will help reduce the speed of traffic on a road used frequently by a number of pedestrians, including young children.

Independent councillor Dan Kerr welcomed the traffic calming measure, saying it had been on of his priorities since his election to Council last year.

“I welcome the pedestrian crossing recently installed in Clonoe along the Moor Road,” said Cllr Kerr.

“It is an extremely busy road with high traffic volumes going to and from the nearby motorway.

“The road also has high pedestrian usage with local schools and estates with young families living in them.

“After getting elected last year, one of my first actions was to arrange an on site meeting with Department for Infrastructure (DfI) representatives to convey and express concern about the Moor Road.”

Cllr Kerr continued: “On an almost weekly basis I continue to lobby DfI representatives as residents bombard me with concerns which I am totally sympathetic and in agreement with.

“This traffic calming measure will increase road safety along the Moor Road but further calming measures are needed across the Torrent local electoral area which I will continue to highlight to the very best of my ability.”

Taking to social media, Cllr Quinn revealed that as a child he had been hit by a car crossing this road and said the work should go some way to making it much safer for all who use it.

“Having been hit by a car crossing this road many years ago I know all about the dangers,” said Cllr Quinn.

“Delighted to see that after years of lobbying DfI by myself and others they have finally installed one [pedestrian crossing].

“This, along with the 30mph speed limit that I got them to agree to in 2018, will go a long way to making the Moor Road much safer.”