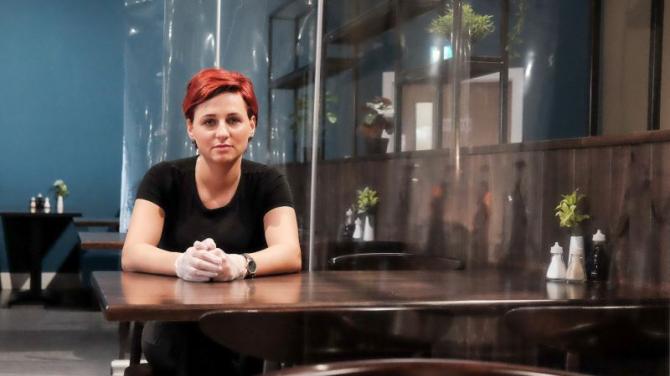 Agata Wylupek, manager, is devastated at having to close the Motorway Restaurant again last Friday. AB204315

A DUNGANNON restaurateur forced to close his doors under the latest coronavirus restrictions has said the financial implications for his business are “catastrophic”.

Michael Raflewski, proprietor of the Motorway Restaurant, said the four-week closure of the hospitality sector in Northern Ireland had come as a “kick in the teeth” for those businesses like his own which had followed all the regulations and invested substantial amounts of money to ensure their properties were Covid safe.

Last week, the Stormont executive agreed that pubs, restaurants and cafes would close their doors to sit-in customers from 6pm on Friday (October 16).

Hospitality businesses are now limited to takeaway and delivery services for four weeks.

The move is among a host of new restrictions imposed by the executive in a bid to stem cases of Covid-19.

Hospitality chiefs have warned tens of thousands of jobs and hundreds of businesses are now in "free fall" across the country as a result of the four-week closure.

For the Motorway Restaurant, on the Woodlough Road and which employs around 20 staff, the outlook is also perilous.

“Financially, the consequences for me are catastrophic,” Mr Raflewski told the Courier.

Asked whether closing for four weeks would sink his business entirely, Mr Raflewski said: “It would not surprise me.

“The last time we shut down, I drew down a personal pension and ploughed everything back into the business. That's not there now.

“The help from the government – of course, it was appreciated, but it was only a drop in the ocean really.”

The executive has announced a support package which will see payments available to businesses every fortnight that they are closed, on a tiered level.

The new scheme will see small businesses receive £1,600 every fortnight that they are in lockdown, medium businesses £2,400 and large firms getting £3,200.

“To be quite honest, I've been that depressed about it, I don't even know what has been announced,” said Mr Raflewski.

“I heard figures of £800 a week. But my electricity alone would be £1,200 a week. I still have to pay my rent. Yes, there's a rates holiday, and loans from the government, but those have to be paid back.

“This is not a case of 'poor me', this is about people's livelihoods, it's horredous.

“I'm not saying this is the end for us, but a lot of people are saying, 'this is it, we'll not recover', and I can fully understand where they're coming from.”

Mr Raflewski said the whole situation has been “an absolute nightmare”.

He was speaking to the Tyrone Courier last Friday, on the same day he would be pulling down the shutters for the last time for four weeks.

“It's very straightforward - we shut the doors tonight at 6pm at that's it. And we won't be open again until we're allowed. It's an absolute nightmare.

“We have a filtration system in this place worth £90,000, we have every conceivable piece of PPE equipment, we have done absolutely everything that was asked of us – in fact, we've gone over and above what we were supposed to do. And it's just all a waste of time. It feels very, very frustrating. Especially when the staff have worked so hard and we've done everything possible.

“So we're going into a total shutdown. They say four weeks, but the last time they said that, it was three months.

“Morale is at an all-time low. It's just devastating but there's nothing we can do about it.”

Although restaurants are still allowed to operate a takeaway service, Mr Raflewksi is not doing so this time around.

“We're not really geared for takeaway and financially it's not viable,” he said.

Mr Raflewski, like many restaurant owners, was shocked when it was revealed the latest restrictions would target the hospitality industry. Previously, health experts and politicians had praised the industry for following the guidelines, and it was claimed that coronavirus infection rates were rising due to transmission in people's homes, rather than in restaurants or cafes.

“It was absolutley infuriating, to be quite honest,” he said.

“The safeguards that we have in place here – I would feel a hell of a lot safer in here than walking around a Tesco.

“But smarter people than me have said we need to just suck it up, so what can we do?

“It's very demoralising for the staff who have went over and beyond to look after our customers. And all for nothing. We just get a kick in the teeth.”

Mr Raflewski warned that mental health issues would be a big factor of this latest lockdown.

“The stress suffered by people who normally would have been financially stable - it's unthinkable.”

As the final meals were being served last Friday, Mr Raflewski paid tribute to his staff and customers.

“I'm so thankful to all our customers, and the way that they diligently stuck to the rules, and the staff also.

“It's bittersweet, and that makes it even more painful. We know we have done everything we could.

“I can say to my staff, 'I'm so proud of the way you followed all the regulations', but that'll not do them a lot of good when they get to the till at Tesco.”