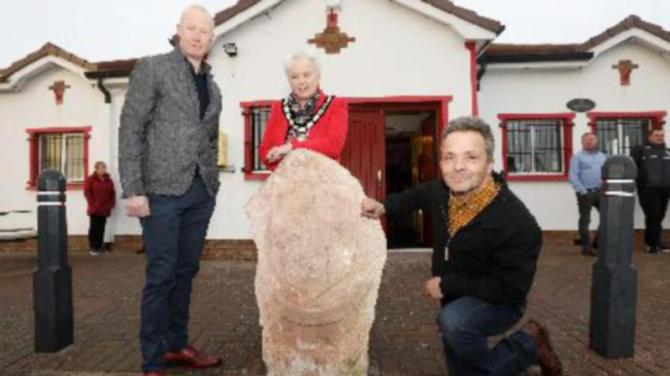 The new art piece consisted of large piece of sandstone rock which had previously been carved with the club crest by local man Paddy Corr.

Three local groups (Newmills Wildlife Gardening Club, Brackaville GFC and Friends of Coalisland Museum and Heritage Centre) were part of a funded Arts and Shared Space project based around the mediums of the shared natural and built (industrial) heritage of the areas. The groups looked at the historic industries of the area including the linen, coal, glass and china works and learnt about how these industries helped to create the 3 areas of population known as Newmills, Brackaville and Coalisland.

Members of the groups then came together on an arts project which consisted of 7 stone carving/metalwork sessions under the instruction of local artist Jonny Kerr. The project also looked to develop 3 wildflower areas at each of the sites to help local wildlife using native Irish wildflower seeds. The groups also helped to plan and develop 3 sculptural pieces to be situated at each of the sites (Coalisland Museum and Heritage Centre, Brackaville GFC and Newmills Community Garden).

On Saturday 3rd October the new art piece for Brackaville was launched by Deputy Chair of Mid Ulster District Council, Meta Graham. Thanks were extended to SEUPB for the European Union’s PEACE IV Programme and ArtsEkta for supporting the project, local artist Jonny Kerr for designing and making the pieces, Brackaville GFC, Keith Beattie and all at Friends of Coalisland Museum and Heritage Centre for taking part in the project.

The new art piece consisted of large piece of sandstone rock which had previously been carved with the club crest by local man Paddy Corr. This was taken and re-carved to make the Brackaville club crest more prominent. It is hoped that the sculpture will be given pride of place outside the club house in the near future.

Match-funding for the project has been provided by the Executive Office in Northern Ireland and the Department of Rural and Community Development in Ireland.