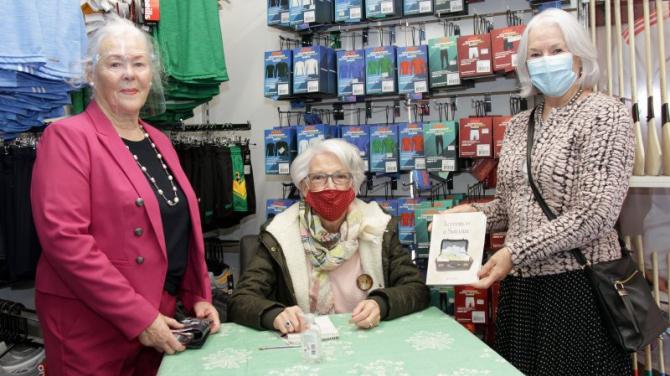 LOCKDOWN has a lot to answer for... and also a lot to be grateful for.

Had it not been for lockdown, Dungannon lady Dana Foley might never have got round to putting pen to paper to write what could turn out to be a best-selling novel!

A true story, “Letters In A Suitcase”, put simply, is about letters which her father, a submariner in the Royal Navy, wrote to her mother during the war years.

But it is much more than that. It is a love story, a war story and a true story that former schoolteacher Dana only uncovered after the death of her parents.

About to be launched in Dungannon, “Letters In A Suitcase” is already receiving rave reviews.

Both met when Ronnie went to London to work just around the outbreak of the Second World War.

After a short romance, they were married on 24th January 1940, but Joe was ordered to return to his base at Portsmouth three days later for a posting to an unspecified location for an unspecified time.

That was the last she would see of her husband for five years.

Joe's submarine was attacked and sunk in the Mediterranean when Italy entered the war and he and his crewmates were captured and taken to various prison camps in the country before being finally released when Italy capitulated in 1943. The war was not over, however; with Germany still fighting in Italy, Joe was on the run until he met the allies in 1944.

During that time, however, his wife received no information about Joe and while many presumed he was dead – a wake was even held for him in his home town of Skibbereen – his wife never gave up hope.

Dana told the Courier: “My mother, during the war years, often wondered if her husband was alive or dead. She kept herself busy and frequently visited Skibbereen to see his family. In fact, so frequent were her visits that she knew the Cahalane family better than she knew Joe, as they had only been married a few days before his departure.”

It wasn't until 1944 that the Admiralty contacted Dana's mum, still living in Dungannon, to tell her the good news that Joe was still alive.

He returned home to Dungannon where all his letters to his wife were stored in an old suitcase which sat in the attic of the house.

Joe went on to open a provisions shop in William Street (where Begley's shop is now situated) and like many of his generation, never mentioned the war.

Dana and her four siblings had no idea of her father's war effort and only discovered his fascinating past after the death of their mother.

She told the Courier: “There are five in our family and we had no idea our dad was in the Royal Navy and of his war exploits.

“It was never talked about. There was one photo of dad with a young boy on his shoulders in our home and when we queried it, mum simply replied that it was a photo of her husband with his Italian friends 'who were good to him'.”

What they didn't know was that those Italian friends gave Joe and his companions shelter during the latter years of the war when they were on the run. Had they been caught by the Germans, all would have been executed.

Explained Dana: “Our family came across the original suitcase in the attic after mum died and it contained over 260 letters from my dad to her during the war.

“The letters told the story of my dad's time during the war and when my brother, Barry, in Canada went on to a website to find out more, he discovered an extract from a journal by an Italian. There were photos also on the website and to my brother's amazement, one of the photos included our dad!

“After making enquiries, we contacted the Italian on the website who turned out to be the young boy on dad's shoulders in the photo in our home.”

Dana, her brother and another sister all travelled to Italy to meet the boy, now much older, and his family and they received a wonderful welcome and learned so much more about his time in the war.

Stated Dana, a former teacher at Dungannon's Presentation Boys' School before it amalgamated into St Patrick's PS, Dungannon: “I wanted to write a book about my father and mother's life story for my family.

“I never got around to it until lockdown when I decided to put pen to paper. It was the first time I had ever written a book and it was quite emotional, particularly during the VE weekend in June.

“It is a love story and a war story and a way of showing my appreciation to all those people who saved my dad's life and who treated him as if he was their own son.

“I got 100 copies printed at my own cost so that it would there for family members, but word has got around and it is proving quite popular locally.”

Dana’s book was launched at Begley's shop on Saturday with the proceeds going to the Red Cross.

That may well be, but generations will also be reading and talking about “Letters In A Suitcase”.

Anyone interested in the book can email Dana at danafoley1@aol.com or phone 07393718634