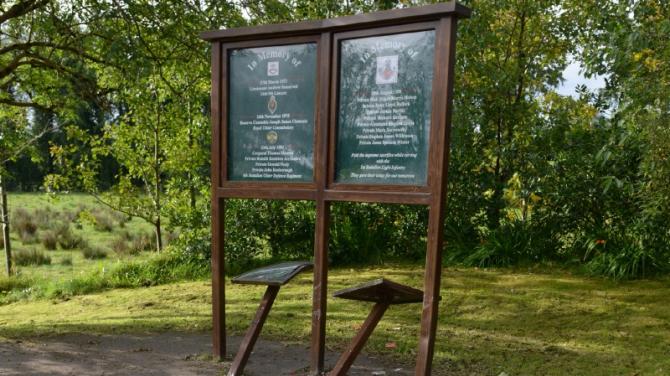 A MEMORIAL dedicated to eight soldiers murdered by the Provisional IRA between Ballygawley and Omagh in 1988 has been extensively damaged in an attack described as an act of hatred.

The monument, in memory of the soldiers who were killed by a roadside bomb in Ballygawley, was erected on the 30th anniversary of the massacre.

Police said the memorial at Curr Road was damaged overnight on Thursday last.

Police have confirmed they are treating the incident as a sectarian hate crime.

DUP leader Arlene Foster called on the public to help the PSNI identify the person responsible and condemned the vandalism via Twitter.

She said the vandalism was carried out by "a certain type of sick person".

Fermanagh and South Tyrone UUP MLA Rosemary Barton MLA, pictured above, stated: “Yet again we bear witness to another sectarian hate crime on a memorial erected in memory of young men who were blown up by over 30 years ago in what has become known as the Ballygawley Bus Bomb.

“This was an act of wanton destruction motivated by a hatred of what this memorial represents as Remembrance Day approaches. The significant damage to this memorial site appears to have been caused by some sort of motorised vehicle with the intent of damaging the memorial beyond repair.

“Each year on Remembrance Day, relatives frequently return to this site to remember their loved ones. Speaking with some of the relatives several years ago they were greatly comforted that the local people of the area, together with the South East Fermanagh Foundation, which had been so proactive in erecting and caring for this memorial.

“I would appeal to anyone who passed this memorial on Thursday night or Friday morning who seen anything suspicious to report it to the PSNI.”