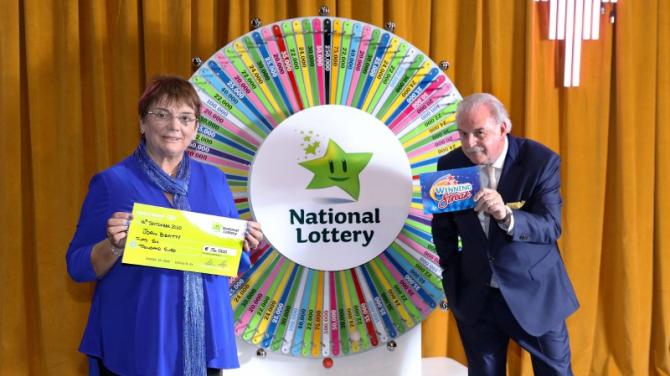 The 2019/20 season of the Winning Streak game show was concluded at RTÉ studios in Dublin on Wednesday 16th September as 10 players took part in two separate game shows which paid out a total of €401,000 in cash prizes.

Among the big winners was Tyrone woman, Joan Beatty from Clogher who scooped a total of €56,000 in cash prizes.

Joan was originally due to appear on the Winning Streak TV game show on Saturday 21st March but this was later postponed following government restrictions due to Covid-19.

Joan Beatty from Clogher, was having a relaxing weekend away with two of her daughters (Linda and Audrey), a couple of months back, and they were staying in Corick House Hotel and Spa, which is near their home in Tyrone. She got a call from her sister, to let her know that her name was pulled from the Winning Streak drum to appear on the next show. Joan didn’t believe her sister, whom she thought was joking with her, and so she hung up the phone. Eventually she came round to the reality and she was truly shocked.

Last June, Joan celebrated her 70th birthday. She has four children: Linda, Joanne, Jane and Audrey and a total of seven grandchildren who are Steph, Gobi, Alfie, Olivia, Archie, D’Arcy and Oscar. She adores her grandchildren and was a childminder for more than 30 years.

Joan‘, originally from Gortin Glen in Tyrone, grew up in a large family alongside six siblings.