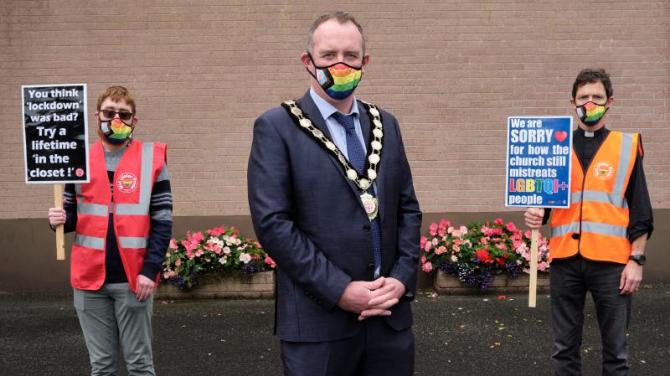 Mid-Ulster Pride is to hold the first ever “Silent but not Silenced” Protest Parade in the centre of Cookstown this Saturday 19th September.

The protest parade, due to take place at 3pm, will be the first silent Pride parade in Northern Ireland and one of the only Pride events to be held outside this year, with other Pride Parades taking place 'virtually' online.

According to the organisers, the Cookstown protest parade will be held in complete silence to show solidarity to those who have no voice, who have been silenced and oppressed for no other reason than being themselves.

With strict adherence to Coronavirus (Covid-19) Regulations, there will be only 15 people participating in the protest parade, each of them wearing a face covering and walking at least two metres apart.

Jonathan Campbell, Chairperson of Mid-Ulster Pride, made clear that safety was the top priority.

He told the Courier: 'We were so disappointed not to hold our parade on Saturday 13th June, but we have followed carefully the safety guidelines of the Northern Ireland Executive and been in constant liaison with the Parades Commission and the PSNI.

“Keeping ourselves and others safe from coronavirus is an immediate priority, but our overall aim is to contribute to the safety of the LGB&TQ+ community in Mid-Ulster by making a stand and reassuring people they are not alone.”

The lockdown has had an impact on members of the Mid-Ulster Pride Committee, but Mid-Ulster Pride's Secretary Josh Cuddy said he will be holding a placard which stresses how difficult it is for some LGB&TQ+ people to be in a permanent “lockdown” by having to live “a lifetime in the closet”.

Mid-Ulster Pride Treasurer Eli Hughes was very keen to ensure that the transgender community will be represented in the protest parade: "We’re silent but never silenced. However we identify ourselves we should all have an equal and valued voice in the local community,” stated Eli from Coalisland.

Another banner will have a “Black Lives Matter” theme and will be carried by Mid-Ulster Pride's Vice Chairperson the Rev Andrew Rawding and Parool Patel, who is a proud 'Gaysian' from a Hindu religious background and who is delighted to be involved in the protest parade.

Stated Parool: “Summer 2020 has been dominated in the news by the Black Lives Matter movement. But what about brown lives, yellow lives and ethnic minority gay lives?

“We all matter; we’re the new normal too. Yet our disparate voices are neither heard nor treated equally.

“Hinduism is a belief system and religion that respects all lifeforms - this could be a straight man, gay woman, animal, insect, bird or mammal. Hindus focus on the soul and mutual respect!”

Mid-Ulster Pride's Queer Heritage Officer Molly Farrell is very excited about the protest parade: "We have a very strong message for the LGB&TQ+ community of Mid-Ulster: We hear your silence. We celebrate you, we love you and no matter how isolated you might feel, you always belong to the family of Mid-Ulster Pride.”

Chair of Mid-Ulster District Council, Councillor Cathal Mallaghan, said: “The impact of the coronavirus pandemic has been felt right across society and never has it been more evident how important a sense of community and belonging is to our overall health, well-being, confidence and self-esteem.

"Our LGB&TQ community is no different and, with this event, Mid-Ulster Pride is safely and clearly showing pride, celebrating progress towards equality and highlighting the progress still to be achieved."

The Mid-Ulster Pride “Silent but not Silenced” Protest Parade has been supported by The Executive Office funded through its District Council Good Relations Programme.