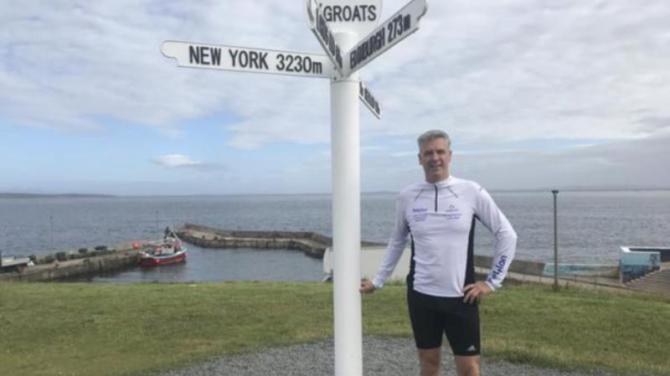 COOKSTOWN man Brian Faulkner has completed his goal of running 31 marathons in 31 days, raising a staggering £10,110 for charity.

Qualified vet and business consultant Brian Faulkner is well known in the sector for his charity efforts – has ran the equivalent of one marathon a day for 31 straight days during an epic mission that took him all the way from John o’Groats on the north-eastern tip of Scotland to Land’s End in Cornwall.

The total distance covered by Mr Faulkner is 844 miles and was completed with funds raised for homeless charity StreetVet.

StreetVet provides free veterinary care for animals of the homeless, and Mr Faulkner was clearly delighted to have been able to do his bit to help the cause by completing his mission on 31 August – the day of his 50th birthday.

Mr Faulkner posted updates and photos online, with his final post saying; "I know StreetVet are very appreciative and I thank you all on their behalf.

"I also want to thank you all for supporting me in so many ways; some big, some smaller, but all significant.

"In particular, I want to mention all those that put me up as well as well as put up with me and / or transported me around."

Following Mr Faulkner’s progress was StreetVet co-founder Jade Statt. She said: “When Brian and I first spoke about this challenge, I was impressed at the mere concept.

“Following him actually doing it every day for the past 31 days has been exceptional. Happy birthday Brian, and thank you so much for such a tremendous effort from everyone at StreetVet.”