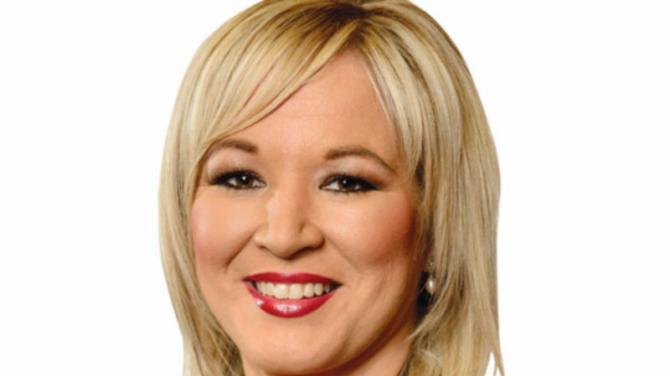 MID-ULSTER MLA and Deputy First Minister Michelle O'Neill has been forced to proceed with a scheme which would see victims of the Troubles entitled to a pension - but which excludes those with convictions from that time.

The victims' payments were approved by Westminster in January.

They would give regular payments to people seriously injured, but have been long delayed by arguments over the definition of a Troubles victim.

Mr Justice McAlinden said the Executive Office was deliberately stymieing the commencement of payouts in order to pressurise the government into funding it and, in Deputy First Minister Michelle O'Neill's case, getting the eligibility criteria changed.

Ms O'Neill had declined to progress the scheme by refusing to allow the Executive Office - which she runs jointly with DUP First Minister Arlene Foster - to nominate a department to administer the pension payments.

Sinn Féin has said the criteria for those who are eligible to apply potentially discriminates against some republicans with convictions from the Troubles.

Following Friday's court ruling, Ms O'Neill said: "As joint head of government I remain committed to delivering a scheme, which is based on equality and open to everyone who was seriously physically and psychologically injured during the conflict.

"In light of the court ruling, therefore, I am left with no alternative other than to designate a department.

"However, that designation will require the Executive to work together to secure the additional funds from Westminster for the cost of the scheme and get further clarity on eligibility and applications."

First Minister Arlene Foster said it was a "welcome judgement".

Writing on social media, she added: "Now time for Sinn Féin to prioritise innocent victims rather than bombers."

The ruling came after legal challenges by two victims to the continued impasse around introducing the scheme with an estimated cost of £100m.

Jennifer McNern lost both legs in an IRA bomb attack on the Abercorn Restaurant in Belfast city centre in March 1972.

Proceedings were also brought by Brian Turley, one of the so-called Hooded Men detained and subjected to special interrogation methods by the British military in the early 1970s.

Even though legislation was passed for the pension scheme which should have opened for applications in May, it remains in limbo due to a dispute over eligibility for payments.

Under new guidance anyone convicted of causing serious harm during the Troubles would be ruled out.

Kenny Donaldson, Director of Services with the South East Foundation which represents innocent victims of the Troubles across Northern Ireland and the UK, stated: "We along with others have campaigned vociferously for the implementation of the pension as per the contents of the legislation agreed in law at Westminster, back in January. We have been insistent that there be no fudging of the eligibility issue and we continue to insist that this be the case".

"The nonsense needs to end from Sinn Fein, stop the lie that ex-prisoners are being discriminated against, these convicted terrorists have access to a National Health Service, to welfare benefits and to many other services courtesy of the United Kingdom Nation alike every other citizen, law abiding and otherwise".

"The Pension introduced is intended as an acknowledgement for those innocents within Society who did not seek to bring about harm to others, they are the people who have been discriminated against and who have to endure 25 years of appeasement of terrorism and its' political annexes. Enough is enough.

"This ruling is a first step redress of this wrong and many more steps are needed over the coming months and years, it must signal the immediate establishment of an administrative department for the scheme.

"Support must get to those who have waited so long to be acknowledged for what they have gone through and the implications that has had upon their lives and that of their families and carers."

Mr Donaldson also called on Westminster to take an active role in ensuring the pension is provided.

"The UK Government must also be constructive in discussions around budget which must happen promptly, we have stated our view that they should centrally provide finance for the historical payments due victims/survivors from the period of Stormont House, 2014 to the point the Executive was restored, with Stormont then picking up the tab on an annual basis thereafter".

"The UK Government should also factor into the block grant the need for a top up to facilitate the paying of Pensions to British citizens living outside the immediate reaches of the NI Executive, namely those living in other parts of the UK, mainland Europe and further afield".

"We acknowledge the efforts of Jenifer McNern in bringing forth the case and commend her courage," concluded Mr Donaldson.

The Commissioner for Victims and Survivors also welcomed the court decision to instruct the Executive to implement the Victims Payment Scheme.

“It is essential that the mechanisms to deliver this payment to those who have suffered the most as a result of the Troubles are put in place immediately,” said Judith Thompson.

“The Commission is currently taking legal advice on the issue of the guidelines advising on conditions for those who can apply, but disquiet about those guidelines should not be a barrier to putting the scheme in place.

“People have died in the time that this delay has occurred, and we cannot afford for that to continue to happen. It is important to realise that this is not a tremendous payday for any seriously injured Victim and Survivor and the bar is high for the level of injury that has to be proven before any payment will be made.

“We have not served Victims and Survivors well as a society and we need to look at this as simply a first step in a number of issues that are imminent in providing support for those who have been waiting for too many years."