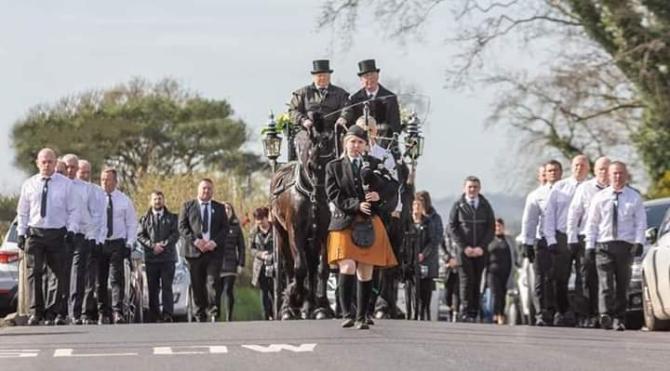 POLICE are investigating after “some people blatantly ignored health advice” by attending the funeral of a former Sinn Fein Councillor.

His funeral was held from his home on the Derrychrin Road, Ballinderry, with burial in St Patrick's Church in the village.

Mr McNally was a Councillor on the old Cookstown District Council in the 1980s, first being elected in the old Ballinderry ward in 1985.

One of his brothers, Lawrence, was an IRA terrorist killed by the Army in the Coagh Ambush in 1991.

There are currently considerable restrictions on the number of people who can attend funerals due to fears over the spread of coronavirus.

And Police have confirmed an investigation is underway with a file being prepared for submission to the Public Prosecution Service.

In a statement, Mid-Ulster District Commander Superintendent Mike Baird confirmed that Police had spoke with the family and the priest prior to the funeral to advise them of the current regulations.

However, he said that “some people blatantly ignored health advice and breached current legislation by attending the funeral”.

He also appealed for anyone with photographs or video footage of the proceedings to submit it to Police and reiterated the call for everyone to “play their part to keep people safe during this global health emergency crisis”.