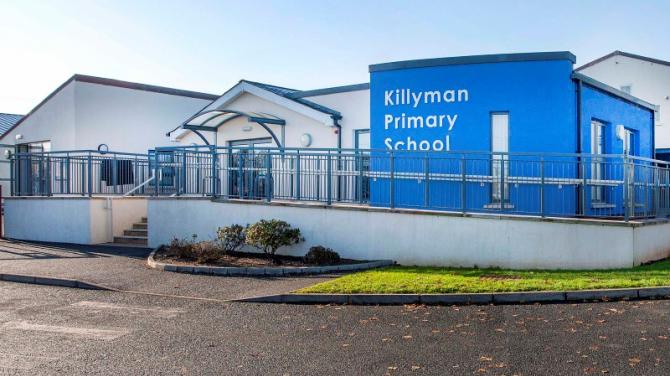 A PRIMARY school which has seen pupil numbers double in just over 10 years has applied for an increase to its permitted enrolment.

Killyman Primary School has grown rapidly in recent years, with the total number of pupils enrolled jumping from 92 in the 2007/8 school year to 179 in the school year just gone.

There was just 12 Primary 1 pupils at the school in 2007, but last year saw 27 children starting their school life there.

Currently the school is operating with five permanent classrooms and two mobile classrooms, although one of those was originally intended to be a storage space.

The school has been exceeding its maximum enrolment number of 165 pupils for each of the past six school years.

With just 20 children completing P7 in June past and 28 approved enrolments in P1 this year, the school has seen yet another increase in numbers.

It is hoped the school, if given permission to increase its maximum enrolment, will be able to accommodate up to 203 pupils. It means the maximum permitted enrolment for new starters in P1 will rise from 24 to 29.

Killyman Primary School is celebrating its 40th birthday this year, having first opened in 1979.

It amalgamated with Tamnamore Primary School in 2007 and remained on the KIllyman site at the Trewmount Road, with numbers rapidly expanding since following a number of new housing developments being built in the area, while there has been a significant increase in births recorded in the area in recent years, rising by 20 per cent between 2009 and 2015.

And school principal Deborah Mitchell, who took up the role of principal just as the boom in numbers began, is very optimistic that the development proposal submitted with the Education Authority will be approved.

Speaking to the Courier, Mrs Mitchell said: “We already have seven teachers here but [the Department of Education] are going to have to work at the accommodation if they do give us the numbers.

“We have seven classrooms but one was for storage, though we have had to use it as a classroom and hopefully they will give us at least one new classroom.

“Killyman is a growing village and we are anticipating that numbers will stay steady or possibly increase.

“We are delighted that the Department of Education are looking at providing us with an extension of numbers and are looking at the new accommodation as well.

“We are a thriving school and at our last inspection in 2013 we had ‘very goods’ in a lot of areas and the rest were ‘outstanding’, so it’s a good school and we are excited for the future.”