Three men are sentenced over drugs raid in Cookstown 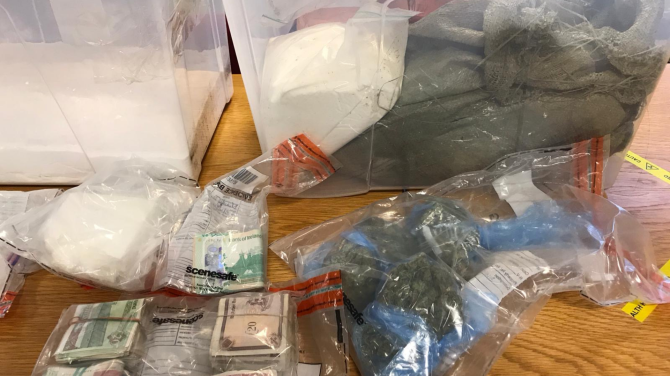 Police seized a quantity of controlled drugs as well as almost £8,000 in cash during the raid of a property in Cookstown.

THREE local men have been sentenced after drugs worth £825,000 were seized in Cookstown.

In Dungannon Crown Court on Thursday, June 16, Luke Donaghy (27) of Killymoon Road, Cookstown, was sentenced to four years with 21 months in custody and 27 on licence.

Andrew Farmer (29) of Riverbrooke Court, Cookstown, received four-and-a-half years, with two in custody and the rest on licence.

Donaghy and Farmer were charged with producing and possession with intent to supply a class A controlled drug, namely cocaine.

Carson was charged with aiding/abetting and permitting the production of a class A drug, namely cocaine. He was also further charged with the possession of a class B controlled drug, namely cannabis, with intent to supply, and the possession of tetrahydrocannabis (also class B), as well as possession of criminal property, namely cash in the amount of approximately £7,950, and for entering into an arrangement which facilitated the acquisition, retention, use or control of criminal property.

Full two-page story and background in this week's Mid-Ulster Courier or check out our e-paper.