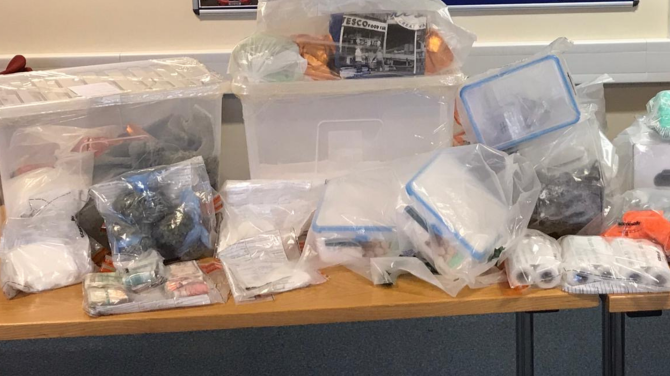 Some of the items seized from the drugs raid in Cookstown

Donaghy was sentenced to 4 years with 21 months in custody and 27 months on licence.

Farmer was sentenced to 4 ½ years with 2 years in custody and 2 ½ years on licence.

Carson received a sentence of 3 years on probation and 100 hours community service.

Detective Inspector Shaw said: “Officers, who carried out a search of a property in the Cookstown area on 8 October 2020, uncovered a drugs-manufacturing factory.  They seized a quantity of Class A controlled drugs and Class B controlled drugs, as well as almost £8,000 in cash.

“The drug seizure, which included cocaine, had an estimated street value of £825,000.

“Whilst acknowledging todays sentencing, I am confident that our investigation, has helped to disrupt the activities of an organised crime group.  These men were actively involved in the manufacture of harmful, illegal drugs and preparing them for distribution.

“Drugs cause unlimited harm – not only to those who take them, but to loved ones who are left to deal with the inevitable fallout.  As well as the physical and mental health effects, vulnerable individuals are also faced with debt and intimidation.

“Through Operation Dealbreaker, and with the support of our partners, we remain committed to tackling the use and supply of illegal drugs.

“We’re grateful to local people for their support and would reiterate our ask for anyone with information, or concerns, to contact us on 101.”