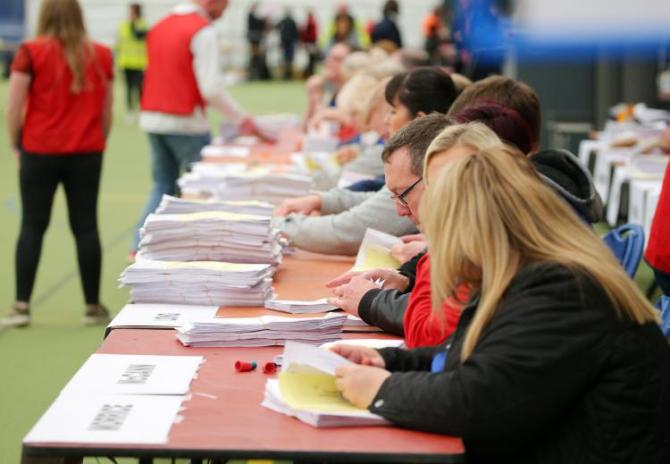 That leaves the final seat allocation for Mid-Ulster as 3 SF, 1 DUP, 1 SDLP. All currently sitting MLA have retained there seats in the constituency.

UUP candidate Meta Graham has been eliminated following stage 6B of the count. Three candidates remain, with Patsy McGlone in pole position.

Following the sixth round of counting, DUP candidate Keith Buchanan has reclaimed his seat in Mid-Ulster. With one seat remaining, Patsy McGlone, who gained 397 votes this round, will be hoping to gain enough votes in the coming rounds to meet the quota and retain his seat. If that was to happen, the status quo would remain in Mid-Ulster, with all current MLAs retaining their seats.

The Mid-Ulster count has resumed in Magherafelt. With Sinn Fein's Michelle O'Neill, Linda Dillon and Emma Sheerin already elected, all eyes will be on the count to see if DUP's Keith Buchanan can make it over the line. After the last round, SDLP's Patsy McGlone has 5997 votes, now within reach of retaining his seat. The next closest candidate is TUV's Glenn Moore with 3828 votes.

22:30 Count suspended until 9am tomorrow morning

Aontú candidate Alixandra Halliday has been eliminated with the count now suspended until 9.00am tomorrow morning. Come back then for more updates as Keith Buchanan edges closer to retaining his seat in Mid-Ulster, along with SDLP's Patsy McGlone.

21:15 Another candidate eliminated after fourth round

Patrick Haughey (independent) has been elimated following the fourth stage of the count. SDLP's Patsy McGlone again gained votes but no candidates gained enough votes to be elected. As a result, the candidate with the lowest total, Patrick Haughey, who had 969 votes, has been excluded.

After another round of the count, SDLP’s Patsy McGlone has gained 467 votes, taking his total to 5887. However, no further candidates have been elected and as such the four candidates with the lowest vote totals will now be excluded and their votes transferred.

Sinn Féin’s Linda Dillon and Emma Sheerin have both been elected in Mid-Ulster after receiving Michelle O’Neill’s surplus votes.

As we await the next round a number of Mid-Ulster candidates are within reach of the quota of 8615.

Michelle O’Neill has retained her seat in Mid-Ulster with a total of 10,845 votes, meeting the quota of 8615.

The vote will now continue to the next stage, with Michelle O’Neill’s surplus votes being transferred.

Counting is underway in the Northern Ireland Assembly elections.

Polls closed last night at 10pm with a total of 239 candidates running in 18 constituencies across Northern Ireland.

Thirteen candidates will contest the election in Mid-Ulster after the late withdrawal of Green Party candidate Stefan Taylor.

The nominations are as follows:

Candidates will then have to get over a quota of votes. If any candidate surpasses the quota they are deemed elected while the candidate with the fewest votes are then knocked out, with their votes transferred to other candidates based on the preferences given to them by candidates.

While the official final turnout figure will not be known until later today the Electoral Office said the indicative turnout at 9pm last night, an hour before the polls closed, was 54%. Turnout was 64% in the last Assembly election in 2017.

The verification of votes at Magherafelt began at 8am with the first results expected around lunchtime.

The final results could be known by the end of Friday but it is possible that counting could pause overnight and resume on Saturday morning.

Keep an eye on this website where you'll be able to get full coverage of the results on our live election blog.