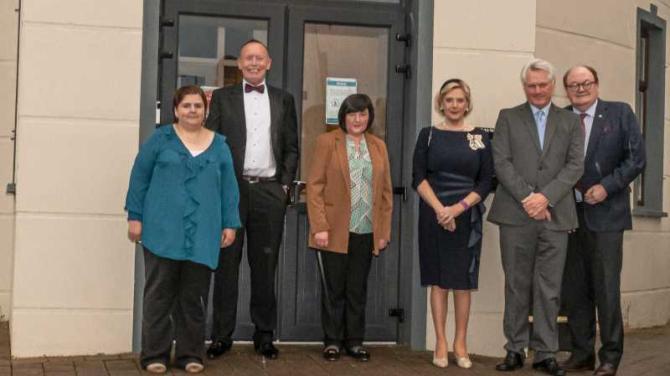 There were celebrations at Maghera Cross Community Link recently as dignitaries visited the Centre to congratulate the committee and volunteers, on being awarded the Queen’s Award for Voluntary Service 2020.

Following a welcome speech by Ruth Watterson, chairperson of the MCCL, Alison Millar said that she was overwhelmed by the community work undertaken by the staff and volunteers at the Centre.

She had particular praise for the Personal Youth Development Programme, funded by International Fund for Ireland, which enabled 44 local young people to engage in a programme to assist them with gaining employment or pursue further education. All other courses from preschool to afterschools clubs, she said, were so beneficial to the community.

Two people who received a special word of thanks were Heather Boyd, the Link manager and Fearghal McErlean. Both worked very long hours to ensure that all services were delivered in an efficient manner.

Volunteer, Jane McMullan, outlined the positive effects that volunteering at the Link had on herself and family. Jane said that although the Food Bank was operating for six years, it was particularly beneficial during the current pandemic, helping those who were "shielding".

Jane announced that from March until the end of July, 2,746 food parcels had been delivered to Maghera residents and those in the adjacent rural areas. She thanked the volunteers from the Watty Graham’s GAC and St Vincent de Paul Maghera for their help with this exercise. Thanks was also conveyed to the wide range of funders, including Children in Need, Mid-Ulster District Council, Halifax Foundation, among others, as well as Maghera business owners for enabling all of the good work to take place.

The chairperson, Ruth Watterson, and vice chairperson, Pamela Hunter were then called upon to receive the crystal trophy and the certificate signed by Queen Elizabeth II.

Finishing off the formal part of the evening, the High Sheriff, Ross Wilson, gave a very interesting talk on the importance of "Linkages" in everyday life. He took his inspiration for his talk , he said, from the name of the Maghera Cross Community Link.