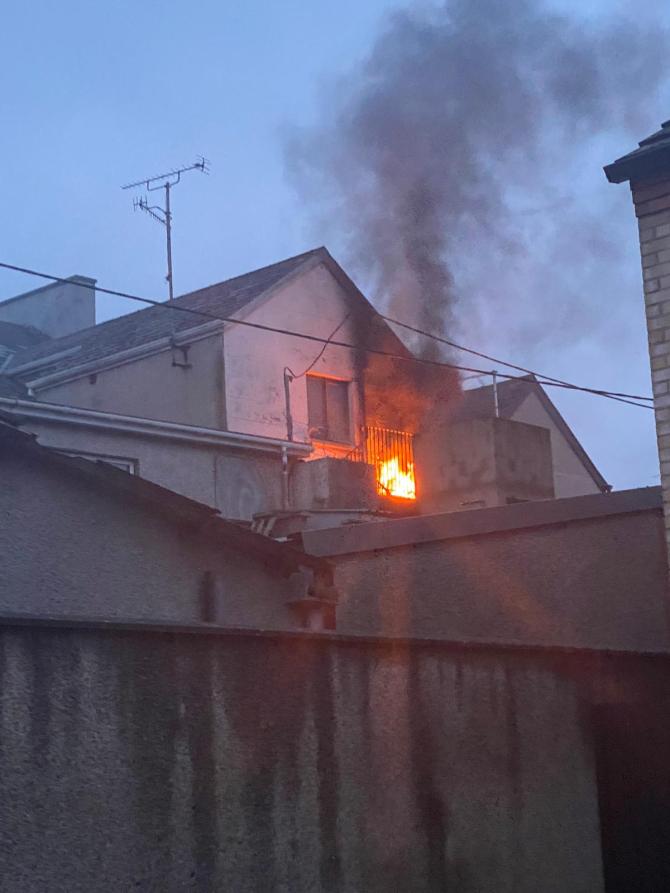 Flames are visible at the rear of the flat at Oldtown Street following Monday morning’s arson attack.

FIREFIGHTERS rescued a man from a blazing flat in Cookstown town centre following an arson attack early on Monday morning.
Two fire appliances from Cookstown and Dungannon attended the blaze in the second floor flat at Oldtown Street at 7.55am.
A Fire Service spokesperson told the Courier that the flat was well alight on their arrival and firefighters, using a ladder, rescued a man in his 30s from a front window.
The man was then conveyed to hospital.
The spokesperson added that the fire was started deliberately.
A PSNI spokesperson described the incident as “a reckless attack” and are appealing for witnesses.
Confirming it was an arson attack, Detective Inspector Robinson told the Courier: “The blaze at a flat in the Oldtown Street area of the town was reported to Police just before 8am.
“It is understood some type of object was placed at the front door of the flat and set on fire.
"NIFRS and Police attended the scene, and the male occupant of the flat was taken to hospital for treatment of smoke inhalation. Smoke damage was also caused to the property.”
Continued the Detective Inspector: “Enquiries into this reckless attack, which we are treating as arson with intent to endanger life, are continuing and I would appeal to anyone who was in the area between 7.45am and 8am, and who saw any suspicious activity, to call us.
“In particular, we are appealing to anyone who saw a male in the area wearing dark-coloured clothing with his face covered and who was acting in a suspicious manner, to get in touch with our detectives on 101, and quote reference number 239 of 01/02/21."