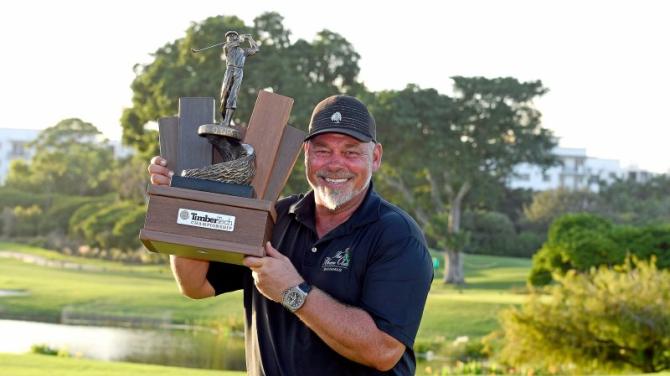 It is Clarke’s first victory since his triumph at the 2011 Open Championship at Royal St George’s.

The 52-year-old fired a final-round 68 to finish on 17 under par for the tournament, one shot ahead of Bernhard Langer and Jim Furyk.

Clarke laid the foundations for his win with a 10-under 62 at the Broken Sound Club of Boca Raton on Saturday.

That round, which included an eagle and eight birdies, left him tied for the lead overnight with Swede Robert Karlsson.

The 2016 Europe Ryder Cup captain carded six birdies in his closing 18 holes, with a double-bogey six at the ninth the only blemish on his final round scorecard.

“I’ve had a lot of opportunities the last few years, so it’s great to finally win one,” said Clarke, a 14-time European Tour champion, including two World Golf Championships, afterwards.

“I wouldn’t be working this hard if I didn’t think I could still win.”

The Tyrone man added: “It’s amazing, after all these years, grinding, working, working ...you turn 50, you get out here, and you want to win so bad.

“The last time I won was in 2011 and I had a very sore head for a week. This may not last for a week, but it will last for a little bit.

“We are a good bunch of people [on the Champions’ Tour]. All of us can really, really play, it’s just whoever gets lucky and holes the putts at the right time, and I was that guy this week.”

Clarke was watched on by nervous wife Alison.

She said: “I had a very nerve-wrecking 18 holes and it was right down to the very last putt. I’m so proud of him. It’s been so long since he won - 2011. It’s emotional. He’s deserved it so many times. I’m so glad that he’s won it here. It’s just all been so special.”