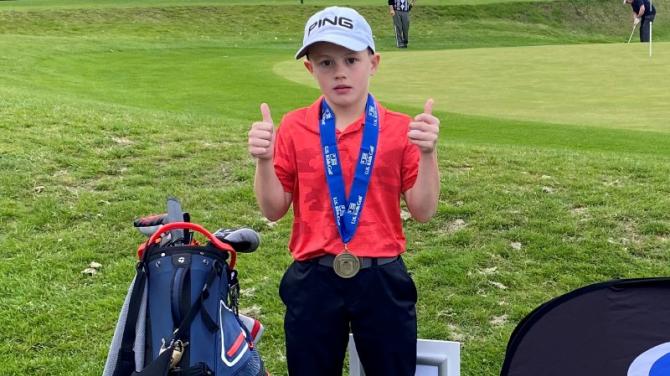 NINE-year-old Shea Kilpatrick from Annaghaboe, Coalisland has been making quite a name for himself on the golf scene as of late.

The schoolboy has put in strong finishes over the last three months in the Irish Junior Open series, travelling all over Ireland to play on some top class championship courses with many top 10 finishes.

Shea also got into the top five at the All Ireland Schools Cup in Greystones, County Wicklow which he played for his primary school, St John's Kingsisland.

He then played in the Champion of Champions 3 day world invitational event in Powerscourt, Wicklow with players competing from across the world, having qualified for that competition due to his strong showing in the Irish Junior Open Winter Tour..

At the Champion of Champions event, Shea played well in his practice round on the first day while contending with heavy winds.

On the secpnd day he played well from tee to green but the fast greens got the better of him, before he made a remarkable comeback with a fantastic display of golf from tee to green on the final day to shoot two over par to earn a top 10 finish.

Fresh from that, he then returned to his home golf club Dungannon to play in Junior Captains Day in horrible weather conditions.

Shea played extremely well to win and lift first prize in his category before three days later travelling to Ballycastle Golf Club to play in the US Kids Tour event.

Everything clicked on the day for Shea as he played some outstanding golf to tie the lead and force a play-off which he won on the first hole with a fantastic par to take first place in the boys U9 divisio.

This win is a remarkable achievement and earns him a lot of ranking points going into the next several rounds of the US Kids tour.

There is no let up for the talented youngster as Shea has a very busy schedule heading into the winter months.

He will keep up his practising daily, working hard on his game, but most of all he is enjoying the experience and meeting new friends along the way.

His home club of Dungannon are extremely proud and supportive of his success.