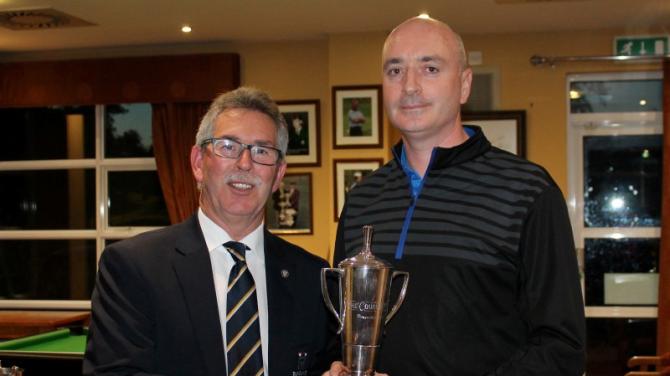 LADY Captain in 1960 and very much in favour of encouraging the higher handicappers, Sadie Maxwell donated a Cup specifically for the 36+ Group.

On Tuesday evening last,  Sadie's daughters, Deborah and Serena came along to present the cup, reminding the members of it's origins.

Presented by former member, Dr. Finnegan, father of current ,ember Hugh Finnegan and won by Sadie, she later decided to put the cup to good use and benefit the Ladies section, for which we are eternally grateful.

On receiving the cup, winner Jane Rankin said how delighted she was to have won her very first cup and it would certainly improve her confidence and encourage her to keep trying.

18 Hole Stableford: The words, 'Purple Patch' could be used to describe Karen Hetherington's state of play currently, as she racked up another win on Tuesday last when she narrowly defeated fellow single handicapper, Sarah Rafferty, who had both the 2's recorded in this Competition.

Lady Captain, Ann Quinn, welcomed all Ladies present, and especially Sadie Maxwell's daughters, and said how lovely it was to welcome them back to where Sadie so enjoyed her Golf.

After the presentation, Ann commiserated with the Tyrone and Fermanagh 4bbb team.

The team are captained by Dympna Fitzpatrick, who had been defeated by Castle Hume on Monday in the final.

Lady Captain Ann said how successful, Past Captain Ivan and his wife Sylvia's ‘Charity Night' had been on Saturday evening and reminded all about the upcoming events and asked for good support.

A NUMBER of Dungannon Golf Club’s Past Captains, played for The Esme Brown and Jack Gough Trophies on Sunday and afterwards, enjoyed a delicious dinner in the Club's 'Springfield Restaurant', when the chat flowed and many memories were shared.

It was wonderful to have 81-year-old Vi Fleming, Lady Captain 1981 and Lady President 1996-98, join us for the Dinner and share her memories of Clublife then and now.

Thanks to Boyd Hunter for organising the event and to Brenadette Keenan for checking the cards.