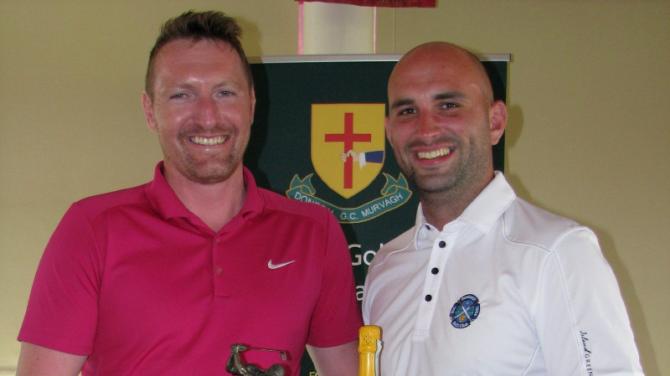 MURPHY’S Golf Society played host to Martin Corr’s Captain’s Day and for this outing there was a debut visit to Murvagh and the Donegal Golf Club.

Although the elements remained kind throughout the day, the recent spell of hot weather left playing conditions extremely tough as the hardened greens and fairways proved difficult to gain control of.

Nonetheless the wonderful setting and challenging blind fairways proved a unique and testing experience.  Indeed, at times it felt like you were playing a parklands course rather than a links one.

There was a good turnout of golfers and after welcoming everyone to his Captain’s Day he expressed the wish that everyone would have a good and enjoyable day.

One man who had the ultimate enjoyable day was Brendan Conway and with high scores at a premium, he came in first overall with a very commendable 34 points.

As this was Captain’s Day, there were more opportunities and prizes to be won thanks to the generous sponsorship of Martin and so for this outing only there was a prize for third place.

With Felix Nugent and Peter Corr both on 31 points it went to a countback to decide the result and it was Felix who won out claiming the third place prize.

Interestingly it is these two men who are fighting it out at the top of the leaderboard for Golfer Of The Year and, with nothing separating them on the day, will a gap appear between now and the final outing at Dungannon come October?

But just one point ahead of Felix on 32 points was Ciaran Cunningham who won second place overall.

The score tallies for both Front and Back Nine were surprisingly normal for the average of any outing.  Pat Mills secured the Best front Nine Card with 18 points while Anthony Corr’s 16 points secured him the Best Back Nine.

Again thanks to the generous sponsorship of the Captain, there were prizes for nearest the pins on all four of the par threes and these were won by Seamus Beggs, Jamie Corrigan, Martin Corr and Sean Hurson although the nearest pin on the very difficult 16th won by Sean deserves special commendation because as the club professional notes explain: “This is the longest par three on the course, and while the hole looks fairly straightforward from the tee, it demands a good drive to reach the green. A fairway bunker, some yards from the front of the green, catches a missed hit and makes par difficult.”

Congratulations to Martin on a great Captain’s Day and there won’t be long to wait until the next outing which is in two weeks on Sunday 11th August at the Slieve Russell.