Dungannon Golf Club honours one of its own 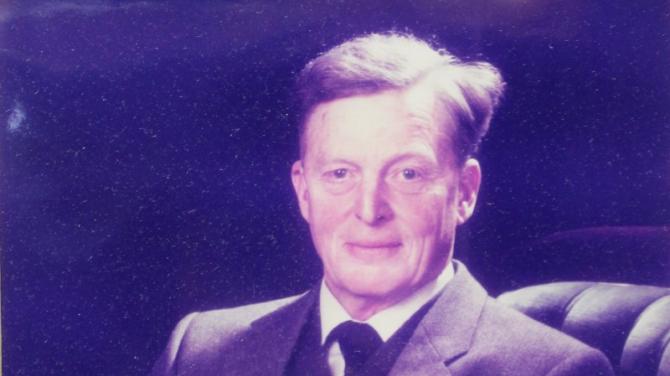 The Captain, Kieran Hagan, spoke of Tom’s long association with the Club and of the Dickson family’s golfing heritage before making the presentation.

Tom’s son, Tim, who had flown over from London to be present, spoke on Tom’s behalf, expressing delight and thanking the Club for bestowing such a privilege on him.

He explained that Tom’s grandfather, James, had been a founder member of the golf club in 1890 when it was just nine holes and located in Dungannon Park (probably a convenient walk from his home in Milltown).

Historically, he represented Dungannon GC at meeting in Belfast to establish the Golfing Union of Ireland, the world’s oldest golfing union.

The best golfer in the family at that time, though, was another Thomas Dickson (Tom’s great uncle), who was a member of Dungannon and Royal County Down.

He won the first Irish Close Championship at Portrush in 1893 (he was also runner up in 1894), he was responsible for the building of the nine-hole course at Banbridge, and his red golf jacket is a feature of the display of golf memorabilia at Royal County Down today.

Tom’s uncle, W T Dickson, was Captain in 1910, prior to setting off to fight in The Great War where, unfortunately, he was killed in 1916.

Tom’s father, Major TCH Dickson, was one of the first trustees of the club. He was Captain in 1912 and served as President for an impressively long stint, from 1941 until 1963.

Tim said: “This Thomas, my father, has certainly been an excellent golfer and an opponent that anyone here would have been happy to take the money off! His lowest handicap, I think, was six and while he was not what would now be called a pot hunter these days he won the Tyrone Cup and was runner up in the Aughnacloy Putter.

“Dad, incidentally, was Captain of Dungannon’s Towns Cup team when a young Darren Clarke first emerged on the scene and he was convinced, long before anyone else said it, that Darren could be a champion one day.

“Nothing has given Dad more pleasure over the years than playing his regular Saturday and midweek fourballs at Dungannon with friends - the likes of Dr Tommy Campbell, Noel Madden and Colin Stevenson - or simply popping out for a few holes with my mother Rosemary – a former captain and Lady President in the days when we had Lady Presidents!

“He taught me how to play on the course when there were only nine holes – and a family visit to Dungannon for me over the years was never complete without a round with him here.”

Rosemary was also the first lady to become a Full Member in both Dungannon and Royal Portrush. Over the years the Dickson family has held the position of President or Lady President for over 40 of the Club’s 128 years in existence – this is a unique achievement and commitment.

After Tim’s speech the Honorary Secretary, Boyd Hunter, expressed his thanks and congratulated him on being Captain of Royal Wimbledon in 2017, its 150th anniversary.

He also wished him well when he becomes Captain of Royal St. George’s next year when The Open returns there. There is another connection with Dungannon as this is where Darren Clarke won the Claret Jug in 2011.

There are many reported links between golf and good health. Researchers from the University of Edinburgh recently published a study in the British Journal of Sports Medicine which stated that playing golf is likely to increase life expectancy, help prevent chronic diseases and improve mental health.

The researchers found that golf is likely to improve cardiovascular, respiratory and metabolic health, as well as helping sufferers of chronic diseases such as type 2 diabetes, heart disease and strokes.

What’s more, the physical benefits of golf increase with age, and balance and muscle endurance in older people are also improved by playing the sport. Golf can be a great social activity and provides mental well-being benefits.

If you want to give golf a go, get in touch with Wallace McCarroll on 028 8772 2098 to find out about the free taster sessions and starter lesson packages on offer at Dungannon Golf Club.