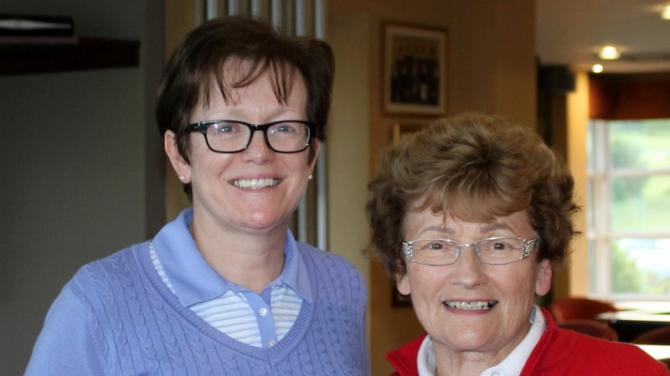 ON Saturday 8th June the men of Dungannon and Killymoon played the second leg of the Tyrone Cup in Dungannon.

The gentlemen from Killymoon picked up the majority of the prizes, however Conor Campbell won his section and many others returned good scores and received handicap reductions but narrowly missed out on the prizes.

The prizes for the Tyrone Cup will be presented in Killymoon Golf Club at 9.00pm on Friday 21st June.

On Tuesday the ladies took to the fairways to compete for a place in the Ulster final of the Darren Clarke MS competition.

Eileen McLean recorded her second victory in this her first season at Dungannon by carding a very impressive 40 points, resulting in a significant handicap reduction.  Well done Eileen!

Karen Hetherington picked up the runner-up prize with 34 points. The Lady Captain, Anne Quinn, reported that Anne Smith's team had played well against Warrenpoint in the second round of the Minor Cup, however they had been unfortunate to lose narrowly.

There was some good news as a number of Dungannon ladies had played in the recent Forest Feast Ladies' Open at Lisburn and Sarah Rafferty returned home with the Best Gross Prize and Karen Hetherington and Jayne Henry lifted section prizes.

Looking forward, Lady Captain's Day is on Saturday 29th June and the ladies' timesheet is behind the bar.

On Wednesday Padhraic McGahan was victorious in the weekly open competition and the remaining prizes were lifted by students Jack Kane, Orrin McGurk and Gerard Currie - the future of golf in Dungannon is in safe hands.

The Junior Academy is going from strength to strength, thanks to the enthusiastic leadership of Eamon Corey.

There were over 20 children at last week's session. Such a large number creates a need for a large number of volunteers, so if you can give a couple of hours on a Saturday morning (10.00 am - 12 noon) to help our future golfers please contact Eamon via the office (028 8772 2098).

On Saturday 8th June the children were excited to be coached by Dungannon's Junior Ambassador, Jack Madden.

Jack has just completed his first year at Oklahoma City University USA, and has made his mark on the college golf scene, being named the Sooner Athletic Conference "Men's Golfer of the Year" and "Freshman of the Year".

Jack learned and developed his golfing skills in Dungannon and is keen to help today's youngsters get to grips with the basics.

Also helping regularly on Saturdays is Jack Loughran. The 15-year-old has recently been appointed Junior Captain of Dungannon Golf Club and he led the Fred Daly team in their first round matches against defending champions Lisburn.

Last Thursday President Lorraine Wilson, Secretary Manager Wallace McCarroll, Junior Ambassador Jack Madden and Trustee Robert Eitel joined with NI Tourist Board to welcome the Claret Jug to the Hill of the O'Neill, Dungannon, as the final stopping place on its "Epic Journey" around the six counties, in celebration of The Open returning to Royal Portrush in July.

The anticipation of golf's greatest competition coming to Northern Ireland has created quite a buzz, with many people thinking about taking up the sport.