Killymoon fundraiser is a roaring success 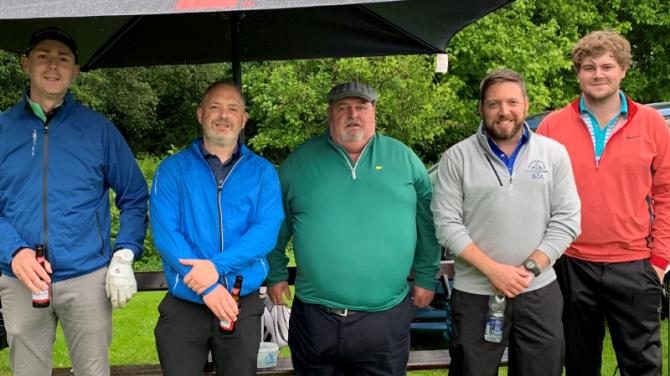 KILLYMOON Golf club hosted its major fundraising occasion of the year with Captain Hugh Doyle’s fundraiser in aid of local charities Cancer Focus and The Hub.

With in excess of 40 teams entered teams began teeing off just after nine am and a steady stream of golfers hit the course until the final fourball teed off just after 5pm.

As can often happen those who had an early start had the best of the conditions as they set off in bright sunshine and for most got in dry.

It was unfortunately a different story for those who headed out later in the day as steady drizzle developed into close to a torrent by the time the last of the players managed to find their way back to the haven of the clubhouse.

The rain however did little to dampen spirits with refreshments and food available at a number of points on the course and once back at base everyone was treated to chef Darren’s now famous braised steak dinner.

Out on the course scoring was close with a number of excellent returns but at the end of the day no one could match the 98 point tally posted by the Caulfield Insurance team captained by Peter McVey along with Barry Monaghan, Paul McElhone and Terry Duffy.

For their prize the lands were presented with a fourball on Royal Portrush to test their skills on the course which will have hosted the Open.

A selection of other prizes including four tickets for the final day of the Open as well as numerous fourball packages for a variety of course went to the other prize winners who included:

Following the golf, a presentation evening with dancing to HYPE attracted a large and enthusiastic crowd to the club houses and Captain Hugh was joined by both charities to thank all those who had made it such a great day. With sponsorship, donations and raffle sales still coming in the final figure has yet to be determined.

On Sunday it was the Steelweld two person scramble winners were

Earlier in the week the Senior Open on Wednesday saw Denis Magee continue a good run of form with 39 points taking the top prize with Ciaran O’Kane in second and Gareth Armstrong taking third.