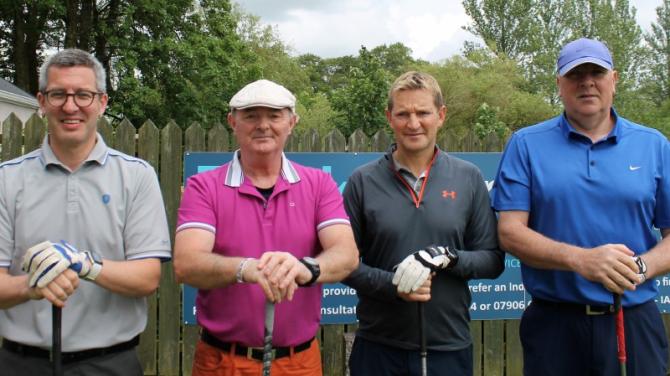 AFTER several days of very wet weather, there were a lot of very relieved golfers when the sun emerged on Saturday morning, on Kieran Hagan’s Captain’s Day at Dungannon Golf Club.

The course was immaculate, the clubhouse decorated brightly and the welcome was exceedingly warm. Kieran and his wife Ann were on hand to welcome golfers.

In the evening the Clubhouse filled up with members and friends chatting and reminiscing about their golf and the day’s events.

The Honorary Secretary, Boyd Hunter, opened proceedings by welcoming everyone to Captain’s Day.

He quickly got down to the serious business of thanking Kieran for working very hard throughout his year of captaincy in order to drive the club forward.

He mentioned Kieran’s successful fundraising efforts, especially last year’s “Strictly Come Dancing” and this year’s “Night at the Races”, and the many other ways he has worked to ensure that Dungannon Golf Club is a great place to play golf and socialise. He also congratulated Kieran for having won the Mixed Traders’ Cup four times, playing with Betty Alexander in the first victory and then his daughter, Sarah, the next three times.

Kieran began by thanking everyone for attending, for making the day so special and for creating many memories. He especially thanked his brother Seamus for travelling from Florida to share in his special day.

He explained how he had taken up the game of golf as a youngster and told several tales of his exploits on the course. He spoke fondly of introducing his daughter, Sarah, to the game as a child and was immensely proud of partnering her to win the Traders’ Cup on three occasions.

Congratulations were extended to Anthony Cush, course convenor, Alistair Brown, head greenkeeper, and his staff for the hard work in maintaining the course in such excellent condition.

He expressed gratitude to Wallace McCarroll and Ann McCann for their administrative support, especially during the past week, and also Shane and the restaurant staff and Denis and the staff behind the bar. He voiced his appreciation for Alastair Fleming of the Golf Shop as well as competitions secretary Sean Coary and his helpers Noel and Gerry for enabling the day’s competition to run so smoothly.

Kieran spoke fondly about several family members who were no longer with us and finally he thanked his wife, Ann, for her unwavering support and her meticulous planning, along with his daughter’s creative genius, in helping to organise Captain’s Day.

The President, Lorraine Wilson, in turn thanked Kieran for running such an enjoyable day. She reminded the members of Kieran’s great organisational skills which he’d put to good use when running Strictly Come Dancing and the Night at the Races. She also thanked thanked Alistair Brown and his team of greenkeepers for having the course in such fantastic condition, along with Shane and his team in the restaurant for serving food all day and then producing a delicious meal in the evening, and Denis and his bar staff were thanked for serving refreshments throughout the day and night.

Kieran, assisted by his wife Ann and daughter Sarah, presented prizes to the following: