Hagan and Quinn drive-in at Dungannon 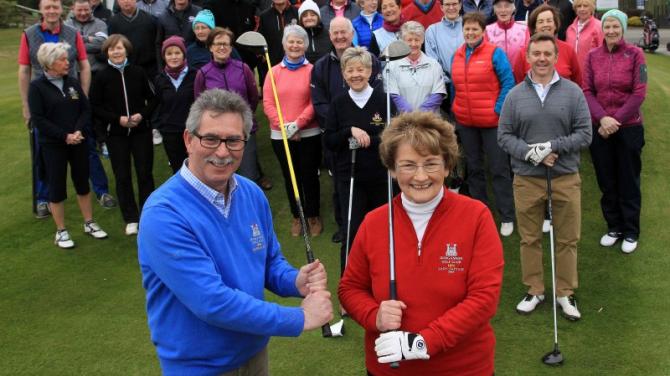 THE weather was fine but decidedly chilly and breezy for the large group of golfers who joined the Captain Kieran Hagan and Lady Captain Anne Quinn for the annual Captains’ Drive In at Dungannon Golf Club.

In total, 26 pairs of men and women competed in the mixed greensomes competition which was played on the front, nine whilst the back nine holes were filled with men playing a stableford singles competition.

After watching the Captains drive off the first tee, the members dispersed to find their way to their designated tees, ready for a shotgun start.

Anthony Cush fired the shot at 6pm and the players began battling it out on the course - the competition was intense yet there were many smiles and laughs.

In a busy clubhouse, filled with golfers regaling their stories of near misses, slices and hooks, the Captain and Lady Captain presented prizes to the following:

Immediately afafterward, ‘A Night at the Races’ began.

Expertly led by Martin McCarron. The atmosphere was tense as the audience watched the horses race but there was much craic and the night was very entertaining.

Thanks to the Captain, Kieran, Lady Captain, Anne and the President, Lorraine, for organizing this very successful fundraising event.

Winter Eclectic: (base card and opportunity to change Hole Score in each subsequent Round -Jan- March)

Lady Captain Ann, thanked Sarah for checking the Cards and wished the three Club Teams well for their matches during the week:

Unfortunately there was a a 4-1 defeat in Foyle but we can only hope for a complete turnaround when we entertain Foyle in Dungannon on Sunday, 28th April.

Next week’s competition is the Hazel McKee Trophy and Peggy Nelson Qualifier.