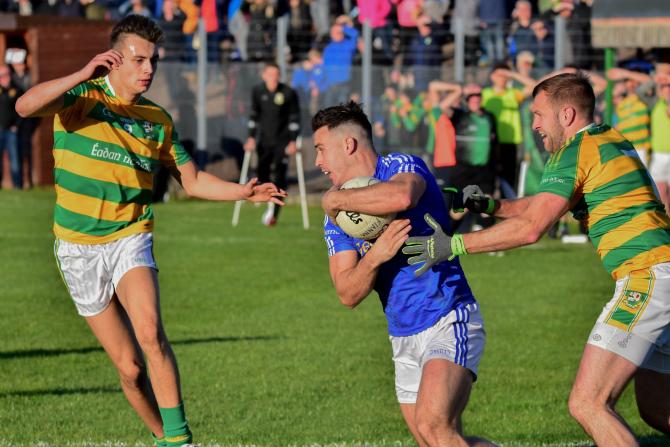 THE start of the Tyrone club season has been delayed for Division One and Two teams due to Tyrone’s involvement in the All-Ireland U20 semi-final.

The campaign was due to get under way on Friday May 6, but with players from a variety of clubs set to line out for the Red Hands the following day, the Competitions Control Committee has decided to defer the club games.

And it’s uncertain when the season will begin. It has been provisionally put back for a week until May 13, but a Tyrone victory over the Munster champions would mean a further postponement until May 20.

“Please note that due to the progression of the County U20's to the All Ireland semi-final, the Division 1 & 2 leagues will now not commence on 6th May as scheduled. Dependant on the outcome of the AI semi-final, the Division 1 & 2 leagues will commence on either the 13th May or 20th May,” said a message to clubs issued by the CCC.

“All games in Division 3 will go ahead on the 6th May, except for Drumragh v Strabane which will be rescheduled (date TBC).”

But an un-related issue may have forced the beginning of the club season to have been delayed, with clubs still waiting for a fixtures schedule.

Plans for the new campaign have been thrown into disarray by a dispute over last season’s battle for promotion from Division Two.

Greencastle won the title on the last day of the 2021 campaign by beating Kildress, but also needed other results to go their way on the final day.

And everything fell into place on a drama-packed afternoon by virtue of a shock defeat suffered by leaders Aghyaran at the hands of relegation-threatened Killeeshil, who consequently avoided the drop to Division Three.

But it later emerged that Greencastle had used and U17 player, which is not allowed in adult football under GAA rules.

The club had the points from that game deducted by the CCC, meaning a major reprieve for Aghyaran, who were to make the step up to Division One, along with Intermediate Championship winners Moortown, leaving Greencastle to remain in the second tier for the 2022 season.

Greencastle appealed the decision, unsuccessfully to both Tyrone and Ulster governing bodies, and have now taken their cane to the Disputes Resolution Authority.

The Tyrone club leagues are due to begin on May 6, but until the matter is resolved, the line-up of teams in Divisions One and Two can not be finalised.

On the day that Greencastle won their match against Kildress, a video taken in their dressing room went vital.

It showed the players waiting nervously for news of Aghyaran’s result, knowing that a defeat for the St Davog’s would see themselves crowned Division Two champions, with an eruption of celebrations breaking out as confirmation came through that the League leaders had been beaten.

But those celebrations may have been in vain, while Aghyaran’s despair may yet turn to delight, with a return to senior football very much still in their sights.

In the meantime, club footballers throughout the county are now facing uncertainty over the starting date for the new season.

Carrickmore will defend the Division One title, having been crowned Tyrone All-County League champions following a 0-8 to 0-6 victory over old rivals Errigal Ciaran in last year’s decider at Dunmoyle.

The top two divisions will revert to their former membership of sixteen teams each, after being increased last year due a decision to suspend relegation but retain promotion as a result of the Covid-19 pandemic.

As a result, four teams have been relegated from the top tier – Eglish, Galbally, Pomeroy and Edendork – and will play their football in the second division this year.

Promoted from Division Two are Moortown, who won the Intermediate Championship, and either Aghyaran or Greencastle.

And the teams making the step up from Division Three to Division Two are Junior champions Moortown and League winners Eskra.

Division Three is not affected by the dispute involving the top two divisions, and will get under way as scheduled on Friday May 6.

Donaghmore are fielding a Thirds team for the first time, joining Errigal Ciaran and Coalisland in expanding their playing platforms to cater for a growing number of players.

Their newly formed side will make its bow in the Division Three league with a trip to Drumquin on Sunday afternoon.

On the same day, Coalisland host Stewartstown in a local derby, with the Harps hoping to begin the climb back following their relegation at the end of last season, while Errigal Ciaran make the trip to take on Clann nan Gael.

But it’s on Friday night that the season will start, with six fixtures scheduled.

Four teams were relegated from Division Two last year, including Aghaloo, who travel to Brocagh for a difficult opener, and Augher, who make the trip to Derrytresk for what will also be a tricky assignment.

Strabane, who also made the drop, are also on the road for a meeting with Drumragh, while a local derby at Killyman sees the home side take on Brackaville.

Glenelly will host Castlederg and Fintona have a home tie against Urney.

N.B. if another pitch becomes available at Garvaghey the Grade 2 Semi Finals will commence at 8.45pm & Final at 9.15pm