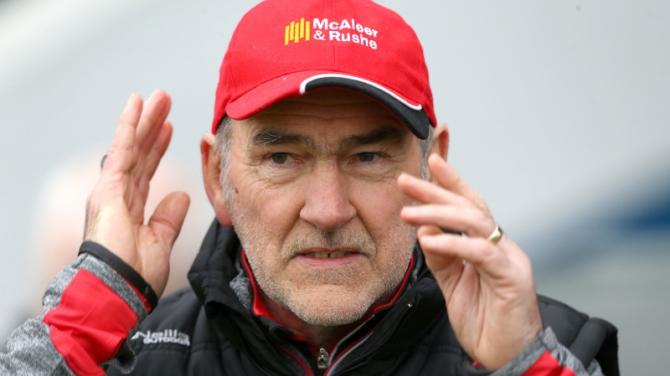 A FIVE-STRONG committee will decide who the next Tyrone football manager is to be.

Nominations closed last night (Monday), the clubs have had their say in the process of finding a replacement for Mickey Harte, and now it’s down to the judgement of senior officials.

The specially-convened committee consists of leading members of the county board, who face a difficult task in deciding who will guide the fortunes of the county over the next five years.

They are expected to invite candidates for interview this week, and an appointment is anticipated in the near future, possibly before the end of the month.

It has also emerged that just one vote decided the fate of Mickey Harte at that crucial meeting of the county management committee earlier this month.

A proposal on whether or not to change the rules to allow for the manager’s request for a one-year extension to his term to be considered was tabled at the virtual gathering.

While the proposal was passed by a single vote – seven to six – it fell just short of attaining the required 60 per cent majority.

Harte had reasoned that since the 2020 campaign had been adversely affected by the Covid-19 pandemic, the final season of his last three-year term, which ended in a straight knock-out Ulster Championship defeat to Donegal, was an unsatisfactory way to complete his tenure.

Feargal Logan is the favourite to take over the post vacated by the treble All-Ireland winning boss, who stepped down after 18 years in the role, having had his request for a one-year extension turned down.

Logan, who guided Tyrone to the All-Ireland U21 title in 2015, has confirmed his interest in taking on the job, which will see the successful candidate appointed for a three-year term.

Appointments will also be made to the posts of U20 football manager and Senior hurling manager, with Paul Devlin and Mattie Lennon respectively having completed three-year terms.

It’s understood that the position of Minor football manager will not be dealt with, as the U17 Championship is currently on hold due to Covid-19 regulations.

Logan is believed to have lined up a proposed backroom team which includes double All-Ireland winning captain Brian Dooher and Collie Holmes, also a member of the Sam Maguire Cup winning teams of 2003, ’05 and ’08.

Dooher was part of the U21 management team in 2015, along with Peter Canavan, who has ruled himself out of involvement in the senior set-up due to the presence of family members in the squad – son Darragh and son-in-law Peter Harte.

Holmes is currently manager of the Tyrone Minor team.

Should he become the new Tyrone manager, Logan will renew a partnership with many members of the U21 team of five years ago who have established themselves as senior players, including Cathal McShane, Padraig Hampsey, Rory Brennan, Frank Burns, Kieran McGeary, Michael Cassidy, Mark Bradley and Conor Meyler.

As Tyrone football moves into a new age, an era without long-serving manager Mickey Harte, an exciting future awaits, with the prospect of a switch to a more attack-minded approach appearing likely.

The arrival of exciting attacking talents Conor McKenna and Darragh Canavan in the latter part of the season gives the county extra options.

Both made their Championship debuts against Donegal, with U20 star Canavan scoring his side’s only goal at Ballybofey.

Former AFL star McKenna hit the net three times in the two National League games he played in, against Donegal and Mayo, helping Tyrone retain their Division One status.

And the imminent return from injury of All-Star full forward Cathal McShane will add to the rich offensive talent available to the Red Hands.