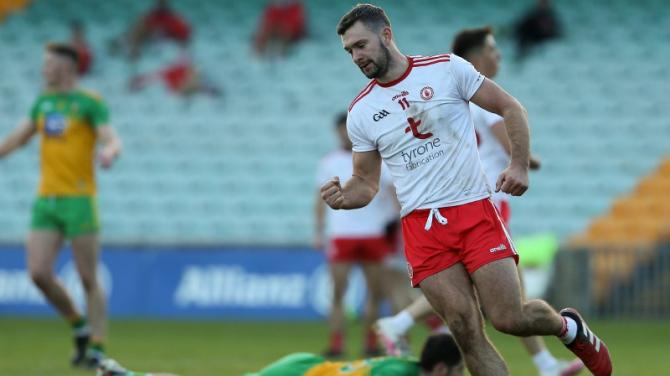 This is a game neither side can afford to lose, and defeat will mean the end of the road for one of them.

The province’s two giants will go into battle in the most ferocious of contests, with their entire season resting on this crucial game.

This most unusual of years has forced the GAA to revert to the traditional straight knock-out format, with no safety net in the form of the Qualifier series.

When the sides met in the National Football League at the same venue ten days ago, it was Donegal who came out on top, giving themselves a psychological boost ahead of this Championship opener.

The game was due to have been played on May 17, but lockdown meant a suspension of the season and a major curtailment of the Championship programme in a new autumnal slot.

Normality is but a distant memory to every member of society, and Covid-19 restrictions will be very much in evidence this weekend during a game played behind closed doors.

In regular times, MacCumhaill Park would be packed to capacity with supporters, rocking with fervour and buzzing with atmosphere, but not a single spectator from either county will be allowed through the gates on this occasion.

Nevertheless, the players are guaranteed to embrace the significance of this crucial contest, and rise to the occasion with all the passion and commitment that games between Donegal and Tyrone are famous for.

But a huge live TV audience will tune in to follow all the action on Sunday afternoon.

For the first time in 13 years, Tyrone will go into Championship action without Colm Cavanagh, who called time in his inter-county career a few weeks ago.

The double All-Star, the last remaining link with the county’s most recent All-Ireland triumph in 2008, was an invaluable servant to the cause throughout his career, and his presence around the central area and expert expression of the sweeper role will be sorely missed.

The loss of All-Star full forward Cathal McShane due to injury is another huge blow, and his presence in the front line of attack will be missed.

But manager Mickey Harte has received a massive boost with the arrival of former Aussie Rules star Conor McKenna, who has made a big impression in his first two games at senior inter-county level.

Skipper Mattie Donnelly will lead the team into battle, and his influence will be important as his side vies for a semi-final meeting with either Derry or Armagh.

Ronan McNamee, Liam Rafferty and Tiernan McCann have the defensive tools to thwart a dangerous Donegal attack which will feature Michael Murphy and Paddy McBrearty, while Peter Harte, Darren McCurry and McKenna will lead the attacking charge.

A crucial win over Mayo at the weekend not only kept Tyrone in Division One of the National Football League, but gave the players a massive confidence boost ahead of Sunday’s Anglo-Celt test.

Manager Mickey Harte isn’t so sure that anything has changed in terms of his side’s prospects of getting a result in Ballybofey.

“Well, that’s up to everybody else to decide. We didn’t really need to change anything,” he said.

“We’ve gotta get a bit of consistency into what we’re about if we want to stay alive in the season.”

Rory Brennan looks like missing this weekend’s tie after receiving a 12-week suspension arising out of his dismissal in the League game against Donegal.

He is hoping an appeal this week will clear him to line out in the sudden death Championship clash.

Asked if Brennan would be available to play on Sunday, Harte responded: “It doesn’t appear so. We would need to wait to see what the legislators say about that.

“He had a hearing, and they kept the sentence as the referee suggested. I think he’ll appeal that and see what he can do.

“I think he deserves to appeal it. In the current situation, 12 weeks is a rough sentence for anything, when you consider the nature of what he did, and consider that 12 weeks this year is the same as 12 months any other year. It takes you completely out of the season.

“So maybe people have to make slight adjustments for this Covid business. We all had to adjust because of it, and maybe the regulations will have to adjust a little bit as well.”

And the Tyrone boss would not be drawn on whether a hearing with the Disputes Resolution Authority would be sought in the event of an unsuccessful appeal.

“That would be pre-emptive. You wouldn’t have to go there if you got the right answer next time.”

Uncertainty surrounds the availability of defender Padraig Hampsey, who missed the clash with Mayo.

“I’m not a hundred per cent sure yet, that will be something the medical people will have to determine,” said Harte.

But Richie Donnelly may be available following his latest brush with injury.