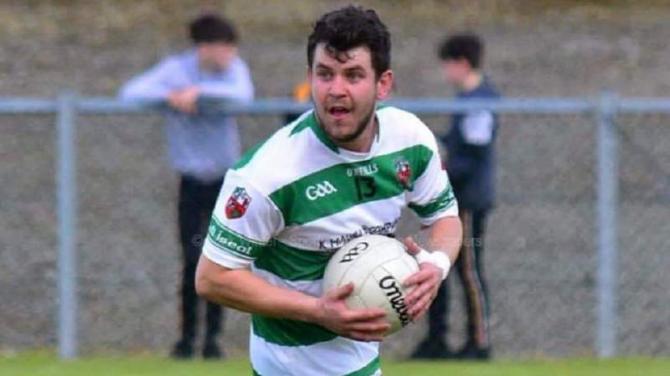 Mourners gathered in Ballygawley on Thursday 15th October for the funeral of a young GAA player who lost his battle with cancer at the age of 29.

Enda Hamill, who was from the townland of Drumfad, died on Monday 12th October, surrounded by family.

A popular sportsman who played for Killeeshil GFC, Mr Hamill was engaged to Emma O’Neill.

The couple, who have a daughter called Ayla, had been due to get married in July last year, however, following Mr Hamill’s diagnosis it was put back to July this year.

Following the arrival of Covid-19 the wedding had to be rescheduled again for August next year.

Speaking to mourners at St Joseph’s Church in Ackinduff, parish priest Fr Patrick Hannigan said Mr Hamill had “lived life to the full” and had loved “football, his club, his food and was a great cook”.

Fr Hannigan said the electrician had been “a team together” with Emma.

“These last 10 years, they were strong and looking out on to a world filled with new hopes and dreams for them," he said.

“The last few weeks have been difficult. Enda being so strong, fought to the end," he said.

Posting on social media, Killeeshil GFC described Mr Hamill as “a gentleman, a great club man and friend” who would be “sorely missed but fondly remembered”.

The club said Mr Hamill had a “love for GAA” and had played for St Mary’s Cabragh “and under the management of his father Damian and along with a lot of his life long friends won the Clogher tournament at U12 level”.

“Enda continued up through the youth ranks and into the Senior set-up".

The club said Mr Hamill and his partner, Emma went travelling, settling in Boston where he joined Aidan McAnespie GFC.

After spending some time later in Australia, where he played with Sinn Féin GAC Melbourne, he and Emma returned to Ireland and set up home together.

He then returned to Killeeshil GFC where he played reserve football before working his way back onto the senior panel “before events took a turn for the worse and Enda got his dreaded diagnosis”.

However, after taking a few months out, he returned and played for the club again, showing “fighting spirit”.

“As he always done on the pitch, Enda battled to the bitter end, but as we now know, The Wee Man couldn't win that one. Enda had lost his battle with cancer, a battle which ravaged him during the current pandemic."