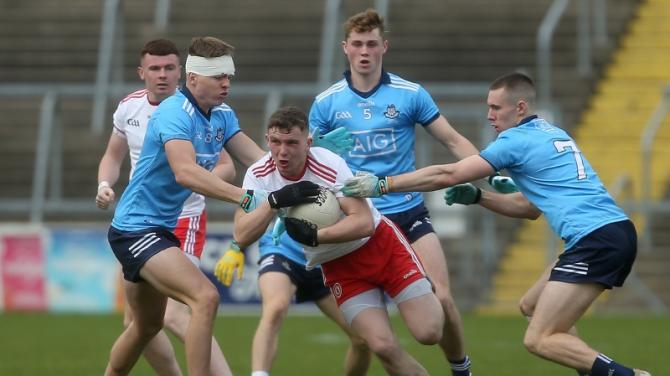 TYRONE'S All-Ireland U20 dream was crushed at Kingspan Breffni Park as they suffered a narrow semi-final defeat at the hands of Dublin.

For the second successive year, the Red Hands fell at the penultimate hurdle, after retaining their provincial crown.

Dublin’s strong finish saw them surge to victory with a late scoring blitz to set up a meeting with Galway in the decider.

Tyrone suffered an early setback, conceding a goal, but hit back with a Tiarnan Quinn strike to lead at the break.

And with the help of points from Darragh Canavan, Ethan Jordan and Quinn, they were still ahead as the game headed into its final quarter.

But the contest and its momentum swung in Dublin’s direction in those closing stages as they dominated possession and picked off the scores that brought them to a second All-Ireland final in a row.

Canavan took just 35 seconds to get the score-board moving, collecting Ethan Jordan’s delivery to convert from the mark.

Dublin countered, but full back Cormac Munroe, sweeper Antoin Fox and Matthew Murnaghan defended with discipline to keep them out.

With Cormac Quinn keeping danger man Ciaran Archer quiet, it was looking good in those early stages for the Ulster champions.

Sean Lowry made a driving run in from the halfway line to flash over Dublin’s opening score in the fifth minute, the ball deflected clear of the crossbar by a defender.

Two minutes later, the Red Hands were back in front, Tiarnan Quinn sending a 40-metre free sailing between the posts.

Another surging run by midfielder Lowry carved the opening for Lorcan O’Dell to bring the sides level, and in the eleventh minute, the Dubs grabbed a goal.

Luke Swan slipped a neat pass to Brian O’Leary, and he beat Lorcan Quinn with a clinical finish, low to the bottom corner of the net.

The Red Hands responded with a delightful Quinn score, sliced off the outside of his boot, but instantly the Dubs restored their three-points cushion with a well-worked point, Lorcan O’Dell, Adam Fearon and Ciaran Archer combining for Mark Lavin to hit the target.

The game was really opening out, with both sides playing some expansive and positive football, and the excellent James McCann pushed forward to create the opening for Canavan to steer over another.

At the first water break, Dublin led by 1-3 to 0-4, but immediately after the resumption, the Ulster champions struck gold.

Simon Garrity sent Rory Donnelly through to get his shot away, and goalkeeper Josh O’Neill responded with a brilliant save, but the ball ran loose to Quinn, who instinctively first-timed to the net to give his side a massive boost.

And they kept it going, adding two points to go four ahead. Jordan landed a long range effort, and some excellent work in the central area from Antoin Fox and Matthew Murnaghan saw Quinn set up Canavan for another gem.

Jordan added a free and it was all looking positive for Tyrone, who defended with vigour, forcing their opponents into a rash of wides.

The Dubs did rediscover their range late in the half, with Archer getting his first score in the 29th minute, from a free, before adding another from play, off Lee Gannon’s assist.

It was Tyrone who led by 1-7 to 1-5 at the break, and while they had to face into the breeze in the second half, they more than held their own for a significant spell.

Another Archer free prompted a positive response, with Jordan drilling a ’45 between the posts, and adding another from a free, won by Canavan, to make it a three-point game.

As the men in sky blue built from deep to create a goal chance for Luke Swan, a collective defensive effort closed him down and the chance was lost, but they soon got themselves back on the offensive for Mark Lavin to shoot a fine score.

McCann, Murnaghan and Fox pressed from deep at every opportunity, and some tidy interplay between Quinn, Jordan and Kevin Barker ended with Simon Garrity splitting the posts.

But there were signs that the Dubs were getting a grasp of some of the vital areas, particularly around the middle third, and scores from Archer and Lavin, with his third, narrowed the gap to a single score.

Tyrone reached the second drinks break with a two points advantage, thanks to Quinn’s converted free, but the final quarter saw the game slip away from them.

Dublin were growing in strength and confidence, and their distribution and support play were of the highest order as the critical closing stage developed.

Goalscorer O’Leary was on target, and while the Ulster champions responded with another Jordan free, that 52nd minute scorwas to prove their last.

Archer displayed his class with a tidy score, and Lorcan O’Dell, a creative score all afternoon, hit his second to bring the sides level.

The pressure was relentless, but Lorcan Quinn’s kick-outs helped Tyrone get some attacking momentum going. However, possession was turned over too often and the Dubs just kept coming.

And the Leinster champions went in front for the first time since midway through the first half when Archer launched a long range effort.

And Tyrone finished with 14 men after Quinn picked up a late black card.