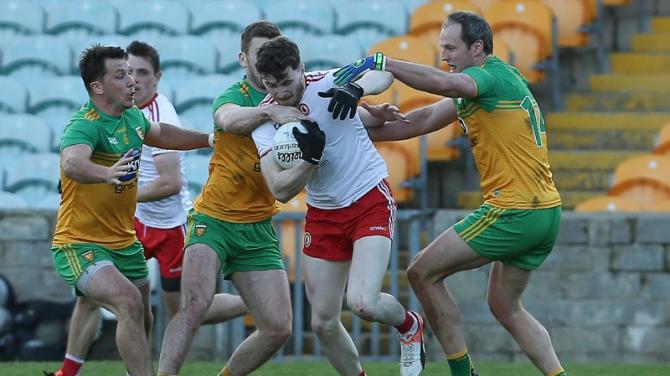 DERBY day defeat at Ballybofey could have serious ramifications for Tyrone.

A four points win on Sunday confirmed Donegal’s survival in Division One of the National Football League and left the Red Hands facing a relegation battle in their remaining game away to Mayo.

The home side grabbed goals early in each half to keep their opponents at arms length, and in the end, Mickey Harte’s side were unable to close the gap.

On this return to action following an unscheduled seven months break in the season, one bright note from an otherwise disappointing afternoon was a sparkling debut by Conor McKenna.

The former Aussie Rules star turned in a highly effective display, hitting 1-2 from play, and is certain to be a huge asset to Tyrone in the seasons ahead.

This was a dress rehearsal for the Ulster Championship meeting of the sides on Sunday week at the same venue, and neither attempted to hold back or indulge in shadow boxing.

The tone was set right from the start, as Tyrone retreated into their own half, allowing Donegal to hold possession for the best part of two minutes, before Jamie Brennan got on the end of the final pass to open the scoring.

Brennan was on target again inside a minute, again finding the space to accept Peadar Mogan’s pass after Paul Brennan had delivered long from the heart of defence.

The Red Hands also met walls of defensive bodies as they searched for openings, but they did manage to prise enough space for Niall Sludden to send corner back Liam Rafferty in for their opener in the fifth minute.

Rory Brennan stuck manfully to the task of shadowing Michael Murphy, but the Donegal captain did get in for a point, before McKenna sent in a delivery which Conall McCann turned into a converted mark at the other end.

But in the eighth minute, Donegal struck for a goal, Niall O’Donnell slipping the pass to the in-rushing Peadar Mogan, who never broke stride as he smashed his shot to the roof of the net.

Frank Burns responded with a mark, but Tyrone were soon under pressure again, facing masses of encroaching gold-clad bodies, but Niall Sludden dropped back to claim an important defensive mark and clear the pressure.

And in the 15th minute, they drew level with a goal from a penalty. Stephen McMenamin was penalised for a push on McKenna, and McCurry drilled the spot kick past Shaun Patton.

Once again, the home side held possession until the scoring opportunity arose, and Niall O’Donnell edged them back in front just before the first water break.

The Red Hands went level again, with Brennan pressing from deep to create the extra man and the space for Mattie Donnelly to land a long range score, but Donegal, safe and secure in possession as always, responded with a scoring blitz, hitting four points in less than three minutes.

Ciaran Thompson converted a free, and McHugh, popping up just about everywhere, sent over two quick-fire scores, with Niall O’Donnell also on target as they went four clear again.

The game continued to follow a familiar pattern, with Tyrone working their way upfield with men in support, and Conor Meyler provided the final pass for Rafferty to steer over his second.

Goalkeeper Niall Morgan’s reading of the danger saw him take up the sweeper role, rushing 35 metres off his line to pick up possession and start the move that ended with Michael McKernan firing over a point.

Murphy cancelled out the score with a converted free, and late in the half, McKenna was poised on the edge of the square to connect with a McCurry delivery, but full back Neil McGee dealt superbly with the threat, punching away to safety.

Donegal led by 1-9 to 1-6 at the break, and while Tyrone made a bright start to the second half, they were hit by another major setback in the form of a Jamie Brennan goal.

Kieran McGeary arrived at pace to take Mattie Donnelly’s assist and split the posts, and McCurry followed up with a free.

But in the 40th minute, another hugely effective link-up between Murphy and McHugh sent Brennan in to rifle a low shot to the net.

A Murphy free stretched the advantage to four points, and the Red Hands had a mountain to climb.

Goalkeeper Morgan converted a ’45, but the visitors were struggling to cope with Murphy’s ability to drift out to the central area and control the play.

The Donegal skipper added a free to his mounting tally, and McHugh sliced over a gem from distance, with Tyrone keeping in touch thanks to the significant input of McKenna, who hammered over a point and created another for McCurry.

But Donegal were more efficient in their use of possession in the final third, adding further scores through Murphy and Ciaran Thompson as they went six ahead.

The alarm bells were ringing for Tyrone as two precious league points appeared to be drifting away from their grasp, but they stuck to their task, with Ronan McNamee, Michael McKernan and Rory Brennan defending with vigour.

Kieran McGeary powered forward to link with Tiernan McCann in setting up a chance for McKenna, who once again used his strength to turn and power over a fine point.

A brilliant score from substitute David Mulgrew brought the visitors closer, but once again, Donegal were able to weather the storm and get themselves back on the offensive.

Caolan McGonagle fired over a point, and Murphy nailed his sixth, from a free, to restore the six points cushion.

And in the closing stages, Tyrone had two men dismissed. McGeary picked up yellow, black and red cards in the space of a couple of minutes, before Rory Brennan departed the action on a straight red.

Nevertheless, the Red Hands finished the game on a high with a brilliant McKenna goal, smashed home following good approach work from McCurry and Donnelly.