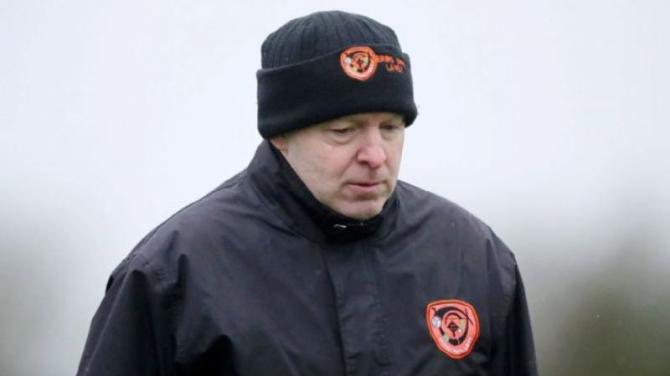 MAGHERAFELT won the toss at Bellaghy on Saturday and elected to play with the wind in the first half.

They closed Lavey down at the back and controlled the ball through midfield.

Eoin McEvoy followed Matthew Downey every inch of Bellaghy's immaculate surface and with Calum Downey out of commission, they brought him deep to get him in the game.

After 20 minutes, a more fluent Magherafelt side were full value for their 0-5 to 0-1 lead, their fifth coming from the outstanding Dan Higgins, a score he made himself.

Earlier in the half, Ben Diamond took a pass from Conall Heron before turning onto his left foot to take a point.

As Magherafelt's Rory Clarke dropped back, it allowed Patrick McGurk to do likewise for Lavey.

Eoin Scullion later pushed up on to Jamie Gribben. Lavey got their reward for hanging in with frees from Enda and Matthew Downey.

All of a sudden it was a two-point game.

In the space of two minutes, Ruairi McGill, Jamie Duggan and Calum Downey forced turnovers in their defence.

They were the small nuggets of the momentum change.

When Matthew Downey was fouled in the dying seconds of the half, Enda tapped over the free to leave the minimum between the teams.

After the game, Lavey manager Seamus Downey felt it was their second quarter, into the breeze, that won the game.

They went into the game as overwhelming favourites, with 12 of their 2019 winning team on view.

Magherafelt were well set up, but a one-point lead was never going to be enough once Lavey found their feet.

Callum Downey dropped one over the bar to level the game.

Six minutes into the second half, Magherafelt struck for the goal their first half efforts needed.

Higgins took a mark from Bateson's kick-out and they switched the play to the left wing.

When Eoin McEvoy raided in on goal, his shot was blocked by a combination of goalkeeper Scullion and Ryan Farrell's trailing leg before the Magherafelt man squeezed home from the rebound.

Rather than sparking Magherafelt into life, it seemed to inspire Lavey.

It needed the composure that matched the precision to pick him out in the middle channel.

After a series of passes, Matthew and Calum Downey were in the scoring zone, but it took Niall Duggan's pass to tee up James McGurk for a score.

It typified Lavey's ice cool method of play, with a maturity beyond their years.

Then Lavey went for the jugular.

Enda and Matthew Downey attacked Bateson's kick-outs and Magherafelt didn't have an answer.

James McGurk added a score and when Conlan O'Kane won the next kick-out, Lavey benefited from a slice of luck.

O'Kane's elevated kick was kept in brilliantly by Calum Downey, who was in the square before the ball.

He never took his eye off it and after stepping inside Jake McCann, he hammered to the roof of the net.

Matthew and Calum Downey added points, the second coming from a Jamie Duggan pass, as Lavey ramped up their intensity.

It wasn't until a 44th minute catch from Aidan McCluskey, that Magherafelt got their hands on the ball.

The water break has changed the pattern of many a game this season, but not this one.

When the teams emerged from their respective huddles, it was Lavey who shot even further ahead with points from Calm, Matthew and Enda Downey to leave them 1-14 to 1-5 ahead after 54 minutes.

Magherafelt had made three substitutions and in the reshuffle, they pushed Dan Higgins to the edge of the square where he was followed by Segdae Melaugh.

Lavey defended in numbers and even Calum Downey was back, almost in a centre back position.

Eoin McEvoy, Higgins and a free from Shea McGuckin reduced the margin to six points, but it was going to take something spectacular to save the game for Magherafelt.

A close range free from McGuckin was blocked by Calum Downey and in the follow-up, Shea O'Neill dived to deny substitute Caolan Crozier, before Rory Clarke elected for a point.

Lavey still had time for one last attack and skipper Jamie Duggan's left peg thumped a long-ball over the top, aimed at Enda Downey's run behind the Magherafelt defence but the ball bounced up and over for the game's final score.