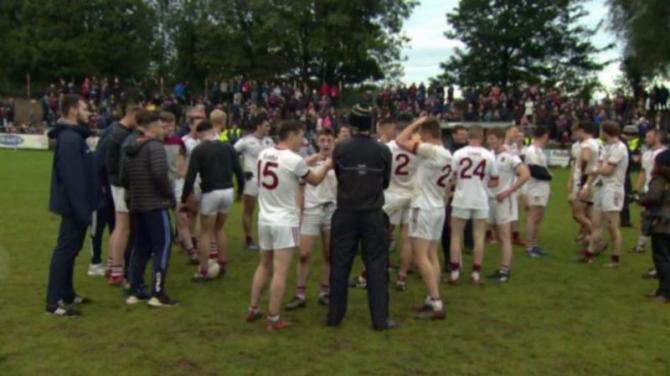 Derry GAA has defended its handling of a county final between Slaughtneil and Magherafelt at the weekend after criticism over spectators appearing to breach social distancing guidelines.

Derry GAA said it had taken measures, including changing grounds, to ensure Covid-19 guidelines were followed.

It comes as the GAA announced that it has paused all club fixtures with "immediate effect".

The organisation said the decision "has been taken in the interest of public safety following a number of incidents that have been brought to our attention in recent days".

"In particular, post-match celebrations and a lack of social distancing at certain events have proved disappointing and problematic," it added.

The game between Slaughtneil and Magherafelt was moved from Londonderry's Celtic Park to Bellaghy, in the Mid-Ulster Council area, after stricter Covid-19 restrictions were introduced in the Derry and Strabane Council area.

Derry GAA said it moved the game as it did not want spectators entering the city given the high rate of Covid-19 cases.

"It was an all-ticket event with restricted numbers and advice on GAA and health protocols were, including social distancing, widely communicated in the lead-up to and during the game," the organisation said.

It added that it had taken the decision to "play an intermediate final and junior semi-final fixtures at the weekend behind closed doors as there were teams from the Derry City and Strabane Council playing in each of the games".

Mr Buchanan told BBC News NI's Inside Politics programme that several members of the community in Bellaghy had sent him images of the crowd at the game.

He said he was not raising it as a political issue but one of personal responsibility and added that others would pay the price for the behaviour of the crowd, which he described as "out of control".

Sinn Féin's Linda Dillon told the programme that she had not seen the images but that if regulations have been broken then it should be looked at.

However, she paid tribute to the role local GAA clubs had played during the pandemic. She said she was sure the GAA would look at the scenes from the weekend and take a responsible attitude.

SDLP MLA Patsy McGlone also told the BBC he had not seen the images but that if there had been any breaches then the Public Health Agency should liaise with the GAA and investigate.

In a statement, Mid-Ulster Council said it "would emphasise the need for everyone to behave responsibly".

A spokeswoman for the council said that "enforcement responsibility lies with the PSNI", and had previously called for people to follow guidance after Covid-19 guidelines appeared to be breached at a match involving Dungannon Clarkes.

Police have said they are investigating a GAA match in Tyrone on Sunday 20th September to see whether Covid-19 regulations were breached.

Following the match, crowds came onto the pitch, leading to concerns about social distancing.

The council added it called on everyone to adhere to "the regulations and guidelines which are there to protect us all, especially as cases are rising".