Redemption for Kildress after superb second half shatters Drumragh 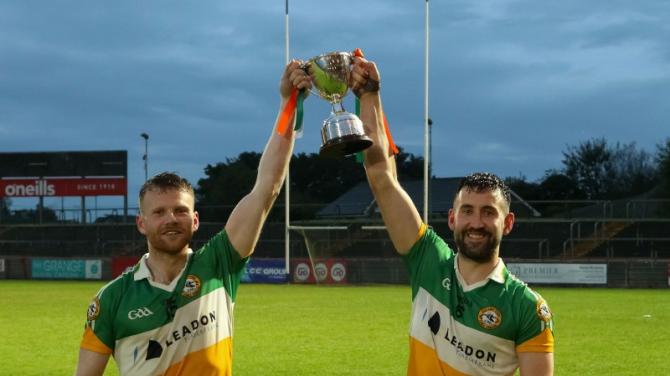 KILDRESS rose to the challenge in magnificent fashion in the second half to reach out for Junior Championship glory and secure promotion back to Division Two.

They put a difficult first half behind them, performing with passion and intensity after the break and hitting three goals to shatter the Sarsfield dream at Healy Park.

It was a second JFC final in a row for the Wolfe Tones, and they were determined to atone for the heartbreak inflicted on them by neighbours Rock in last year’s decider.

Shea Murphy, Conor Quinn and Philip Lennon all hit the net to see the men from Gortacladdy over the line on Sunday evening as they turned the tide, having trailed by four points at the interval.

Joint captain Philip Lennon revealed that the group had used the hurt from defeat in last year’s final as their primary motivational tool as they prepared for the decider.

“It was massive, it was the driving force. There’s nothing as hateful as being beaten in a county final by your local rivals,” he said.

“So from the start of the year that was the driving force. We always wanted to get up, one way or the other, League or Championship, but it was just ideal to get back here in the Championship final for a bit of redemption and come out the right side of the result.

“Last year we maybe took it a bit for granted, after coming down to Junior we maybe expected to go straight back up, but it’s just not as simple as that.

“But thankfully this year we stuck together, did everything we could, and thankfully the end result is we’re getting back to Intermediate football.”

But it didn’t look promising at the halfway stage, when Drumragh were ahead by four points and the Wolfe Tones were struggling to get momentum going.

“We went in at half-time and there was a lot of men’s heads down, but thankfully we rallied round and we got them up and going again.

“Thankfully we had a great start to the second half and we just drove on from there and it all went to plan.

“We have a great bench, a lot of youth on the bench and great pace coming off the bench, and those boys came on and made an awful impact.”

Sharing the captaincy with Dean McNally has been an uplifting experience for Lennon, who believes dual leadership has worked really well for the squad and for the two men who eventually got to receive the trophy at Healy Park.

“You’re never under pressure to be the sole captain, and these lads are first class, the amount of work they have put in all year, through lockdown and everything. It has been unbelievable.”

With silverware in the bag and promotion secured, Kildress could easily reflect on a successful season at this stage, but they’re not finished yet, and Lennon insisted that they will push on and go for the League title as well.

“We’ll not be resting on our laurels just getting the Championship. We’ll want to win it all.”

Drumragh suffered a cruel pre-match blow as centre back Paddy Colgan, a rock at the heart of their defence right through the campaign, was ruled out by injury.

And Kildress almost got in for a goal in the opening moments, but goalkeeper James Colgan advanced to clear the danger as Eoin Brannigan reached for a cross from the left.

But the Sarsfields warmed to the task and showed no big-match nerves or fear of being the pre-match favourites as they threw themselves into the contest with fearless commitment.

Their tackling was hard, but fair and effective, with Eamonn Kerrigan, Michael Mullan, Sean McGale and sweeper Gareth Haughey all rising to the challenge as the Wolfe Tones pressed forward.

Shea Murphy swung over the opening point to get the east Tyrone side going, but the men from Clanabogan responded with three scores on the spin.

Tommy Mullin opened their account from a free, and when he delivered into the path of Shane Devine, the full forward spun away, eating two markers to slot the ball between the posts.

Skipper Shane Cleary was also on target from a free, but Kildress got through a difficult spell to reach the first water break on level terms, with Conor Quinn rounding off a move involving Eoin Brannigan and Enda McAleer, before Matthew McGuigan won the free that Philip Lennon converted.

But the Sarsfields raised their game again, and after Sean McGale had used his strength to power through for a point, they struck for a 21st minute goal.

It was Ronan Maguire who sent the dropping ball towards the danger area, where Shane Devine rose to punch to the net.

And after Tommy Mullin’s free had cancelled out a Lennon effort, it was Drumragh who led by 1-5 to 0-4 at the break.

But Kildress came out for the second half with the rousing words of manager Roger Keenan and coach Tony Scullion ringing in their ears, and they lifted the intensity to a new level.

They reeled off four points in the opening seven minutes to get themselves level, and the alarm bells were ringing for the men from Clanabogan.

Lennon slotted over a point before Dessie Tracey drilled another through the posts. Lennon, again, and Conor Quinn added further scores, a lot of that attacking momentum due to the workrate of midfielder Enda McAleer, with full back Callum Holland and centre back Dean McNally also pressing from deep at every opportunity.

Drumragh struggled to get out and break the press, and managed just one point in the third quarter, a 40-metre free despatched by Cleary.

And their cause became altogether more difficult when Kildress grabbed a 48th minute goal, fisted to the net by Shea Murphy, and giving them a 1-8 to 1-6 lead at the second drinks break.

Cormac Norris did everything he could to kick-start at Sarsfields revival, and while Kerrigan, the excellent Micheal Mullin and Haughey tried to hold things together at the back, there was little they could do to stem the flow of Kildress attacks.

Quinn won a free that Lennon converted, and in the 57th minute, the contest was effectively over when they hit goal number two.

Lennon’s dropping, swerving ball into the goalmouth was parried, and as it ran loose, Quinn gathered to boot to the net from close range, and now they led by six.

It was now a case of damage limitation for Drumragh, who added late points through Cleary and Aaron Montgomery.

And despite losing substitute Corey Holland to a black/red card combination, the Wolfe Tones finished with another flourish, Lennon blasting a penalty home, via the underside of the crossbar, deep into stoppage time.