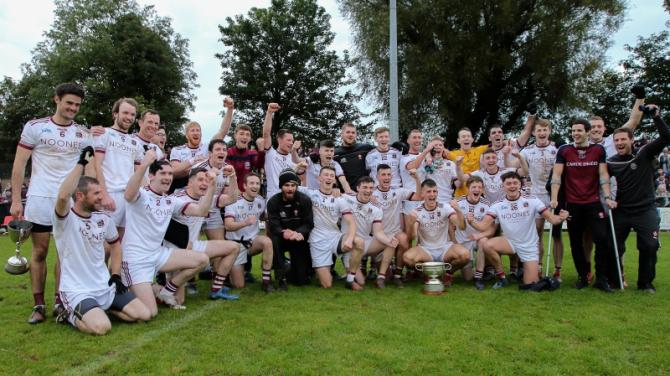 MAGHERAFELT lined out as expected with two noted defenders in their forward line.

When Slaughtneil attacked, the Rossas had fifteen men behind the ball. Slaughtneil responded as much as to say ‘we can play that way ourselves.’

The result was a dreadfully boring first half - the score 0-4 to 0-2 and not a forward had scored from play. A ‘Sammy’ Bradley free was the only one out of the two forward lines to score and that was a free.

The second half was an end to end thriller. Two early second half points put the winners four in front and the reigning champions had no option but to come out of their defensive formation and chase the game.

There were fleeting moments when Magherafelt might have turned things around. A superb goal by towering midfielder Jarrad Monaghan reduced the gap to two after 38 minutes but the vastly experienced former champions were always able to counter.

In added time the Slaughtneil keeper Antoin McMullan had to make back to back saves to prevent Magherafelt from drawing level. Just as they have been doing over the years Slaughtneil never panicked and clinched their fifth title in seven years with a point from sub Ronan Bradley.

The preceding intermediate final had been played in pouring rain yet when the seniors lined up they were playing on a fairly firm sod. Thankfully, the rain stopped an hour before throw in time.

While the first half was defensive and low scoring the discipline in the tackling was superb with very few frees given away. Any frees that were given over the hour were mostly availed of.

There has to be huge question marks over the Magherafelt tactics. Of their 1-4, three points were scored by defenders and the goal by a midfielder. A pointed free by Shane Heavron was their only score by a forward.

It was the only scoreable free that the highly disciplined Slaughtneil defence gave away in the entire game. Magherafelt gave away three frees which were duly dispatched over the bar by both Christopher Bradley and the championship top scorer Shane McGuigan.

In general, the Magherafelt system did limit the Slaughtneil scoring machine but no team is going to win a county title without scoring forwards.

Veteran Bradley the Slaughtneil man for all seasons

Patsy Bradley is in his mid-thirties but he continues to make a huge contribution to his team. On Sunday he was collecting his sixth championship medal, going back to 2008.

He again excelled as a defensive midfielder dropping in between the full and half back lines to cut down space for the opposing forwards. He has had more than his fair share of injuries over the years but keeps coming back.

On Sunday, he never put a foot wrong. In the dying embers of the game Magherafelt forced a ’45. Their goalie Odhran Lynch did what he was supposed to do and that was to drop the ball into the goalmouth. That he did to perfection but a player rose above the rest to make a superb catch. That man was Patsy Bradley.

When it came to scoring from play the backs and a midfielder contributed 1-7. The forwards, including four attacking subs, just managed three points from play. The other scores came from ‘marks’ and frees.

The ‘man of the match’ award went to Slaughtneil centre half Chrissy McKaigue who hit two thunderous long range points in the first half. He marshalled his defence superbly and even when he did not have the ball he was creating valuable space for his team mates.

Magherafelt did limit Shane McGuigan to one point from play. His other two came from a mark and a free. Christopher ‘Sammy’ Bradley was the most fouled player on the field but his two converted frees and a mark was a valuable contribution on the day.

Magherafelt had the first attack and their captain Danny Heaveron the first wide. Then it became bogged down in a defensive bore. Magherafelt quickly retreated into a defensive shell with everyone behind the ball. It took seven minutes to get the opening score, that was a Christopher Bradley free after Sean Cassidy had been fouled.

Magherafelt quickly drew level with a clever counter attack finishing with a Conor McCloskey point. Chrissy McKaigue with the freedom to go forward bombed over the lead point and from there they were never headed. It was McKaigue again in the 11th minute with another monster point showing how to beat a packed defence.

Shane Heavron had the chance to close the gap but his long range free dropped short. It took until the 23rd minute for the Rossas to bridge a fifteen minute famine and that was a superb point from Conor Kearns their attacking wing back. Three minutes later Conor McAllister claimed a ‘mark.’ From an outrageous angle he made the score 0-4 to 0-2.

Slaughtneil used the wings well in an effort to get behind the Rossas ‘wall.’ When Slaughtneil got their defence set up the Rossas forwards just got swallowed up. Half-time probably came as a relief for the supporters.

Slaughtneil went for in on the resumption with Shane McGuigan sending over from a Sean Cassidy pass.

With Magherafelt now more open at the back Slaughtneil went four clear when Cormac O’Doherty set up wing back Francis McEldowney and he fisted over for a 0-6 to 0-2 lead.

They continued to turn the screw and after Chrissy McKaigue and ‘Sammy’ Bradley had recorded wides, full back Brendan Rogers came up to punch over a point to open up five point gap.

Magherafelt were always dangerous on the counter attack and in the 38th minute Patrick McLarnon blazed a possible goal chance well wide. Magherafelt then brought on Cormac Murphy and Niall Higgins. Murphy was just on the pitch when he played in Jarrad Monaghan and the big midfielder crashed the ball to the net to leave just two points between the teams.

As was expected, Slaughtneil got the next score and that came from a Christiopher Bradley mark to make the score 0-9 to 1-3. The Rossas suffered a blow when full back Darren O’Neill got injured tackling Brendan Rogers. He was replaced by Peter Quinn who played his club football with Ballymun in Dublin last year. Ryan Ferris then picked up a yellow card for fouling the rampaging Rogers. From the free Shane McGuigan converted to make the score 0-10 to 1-3.

Conor Kearns broke a long scoreless spell with what proved to be his team’s last score. As they pushed forward Niall Higgins shot a wide and Antone McElhone got a yellow card.

The Rossas did what they should have been doing earlier and that was going into all out attack. Antoin McMullan made two vital saves in the closing stages and Patsy Bradley cleared the last scoring chance the Magherafelt team had.

In the second minute of added time Slaughtneil opened up a safe four point lead to make the Emmett’s worthy champions once again. A quick counter attack found sub Ronan Bradley in a good position. A goal looked certain but just to make it safe Bradley punched over a point which was their third similar sore of the day.

For Slaughtneil this was the fourth time they had won the domestic treble in the last seven years. They already had the hurling won, on Saturday the camogie team delivered and 24 hours later the John McLaughlin cup was in the safe hands of Shane McGuigan.

For Magherafelt, who won every football title last season, it was not such a good week. On Tuesday they were beaten by Ballinascreen in the under 14 final, on Saturday they lost to Lavey in the under 18 decider and completed the unwanted treble on Sunday.

Rossas must improve in attack

If Magherafelt are to regain the title they must improve in attack as 1-4 is never going to win the county title. When they met another of the main contenders Glen they just got a point more. Against Lavey they won by scoring 1-8. It’s okay to curtail the scoring of other teams but you must score more yourself.

Slaughtneil’s epitaph has been written a few times in recent years but the manner in which they have taken the title this year suggests that they are not in the mood for going away.

Their two oldest players - 39-year-old Francis McEldowney and 36-year-old Patsy Bradley showed that they still have a lot to offer.

Roll on the 2021 championship.