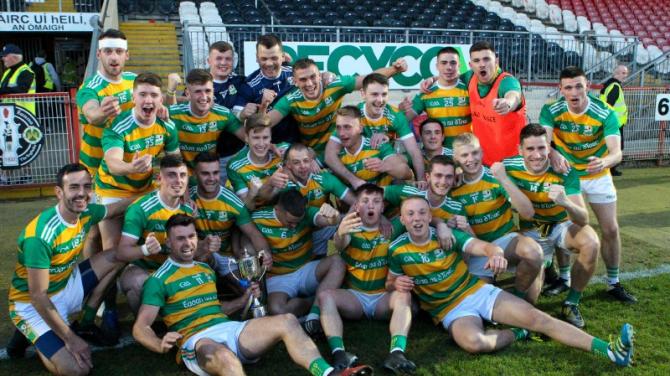 EDENDORK'S pace, power and sheer class carried them to victory at Healy Park, where they were crowned Tyrone Intermediate champions following an eight points win over Gortin.

A dominant display by the St Malachy’s secured the title and an immediate return to senior football for the 2021 season.

Tyrone star Darren McCurry stamped his class all over the game, laying on an exhibition of finishing, and he finished with a 1-8 haul, including a sensational individual goal.

On a disappointing note, they will not be chasing Ulster glory following this LCC Group IFC triumph, as the provincial championships have been removed from a revamped calendar due to the Covid-19 crisis.

But there could be further success on the way for the club, as they are still in contention for the Division Two League title.

Relegation via the play-offs at the end of last season came as a bitter disappointment to Edendork, but they resolved to do everything in their power to get themselves back to the elite grade.

And on the evidence of this impressive display, they will not look out of place when they mix it with the top Division One teams in 2021.

The first real chance fell to Harry Og Conlan, who was sent through by McCurry, but found himself crowded out by a trio of defenders.

And it was Gortin who struck first, Shane Clarke laying the ball off for Eoghan McGarvey to send over their opening point in the fifth minute.

The lead lasted less than a minute, with Stephen Corr and McCurry combining to send Harry Og Conlan in to split the posts.

With Brian McGarvey, Ruairi Keenan and Niall McGinn working tireless around the middle third, the St Patrick’s caused problems for the opposing defence, going back in front with a Peter Keenan free, won by the ageless Shane Clarke.

But Edendork tightened up at the back, with Padraig Donnelly, Ruairi Conlon, Stephen Corr and skipper Conor Mallon tenacious in the challenge.

McCurry, being shadowed by Cormac Bradley, began to move with purpose and menace, sending Daire Conway in for a fisted point, and they went ahead for the first time in the tenth minute when Conn Kilpatrick and Cain Ferguson combined for a superbly executed point by centre back Corr.

Sean Og McAleer brought the side level from a free, but in the 14th minute, the St Malachy’s struck a major blow with a brilliant McCurry goal.

The Tyrone attacker turned his marker on the 45-metre line and set off at searing pace before drilling a well placed shot to the net past Christopher Greene.

It was the beginning of a purple patch which saw them hit 1-4 without reply to take a firm grip on the contest.

Using a clever kick-out strategy which crowded the middle with players before one man made a last-minute run into space to collect from ‘keeper Mark McReynolds, they were able to build creatively from deep.

McCurry was enjoying himself, landing a couple of delightful scores, one off each foot, and when a Mallon effort came back off a post, Jake Ferguson collected to shoot a point.

As McCurry made it 1-7 to 0-3 with his third point, off a searching Niall Morgan delivery, it was looking good for the men in green and gold hoops, and they were winning the lions share of possession around the middle, through turnovers and broken ball.

Gortin managed just one point in the second quarter, a Ruairi Keenan effort which was quickly cancelled out by a monster point from play from Morgan, who added his second in stoppage time.

Gortin were down to 14 men for the opening ten minutes of the second half, Eoghan McGarvey having picked up a black card just before the interval.

And Edendork picked up the tempo immediately on the restart, stretching the lead out to ten points as McCurry continued to find the range.

He converted two frees, one of them sliced between the posts from 45 metres, and when Mallon raced through to punch over a point, it looked as if it was all over for the men from the Glen.

Substitute Sean McKenna pulled back a point from a free, but the St Malachy’s were able to post a response with interest, McCurry adding two more to his tally, including a sensational point from close to the sideline.

But every time Gortin countered, they had an able ball-winner in veteran Shane Clarke, and his ability to pick out runners with a pop pass was a bonus, as he sent Ruairi Keenan in for a point.

Edendork were soon back on the attack, and some excellent defending from Patrick McCullagh and Brian McGarvey helped them out of difficult situations.

During a spell of pressure they conceded just one point, a well-taken effort from Conn Kilpatrick, one of Edendork’s most influential players.

And Gortin staged a late rally, with Keenan hitting his fourth, before Eoghan McGarvey found the target, and right at the end, Clarke dived to meet a Sean McKenna cross with the fist, planting the ball in the net for a deserved goal.

Morgan applied the coupe grace for Edendork, however, driving a 50-metre free between the posts moments before the final whistle sparked celebrations.