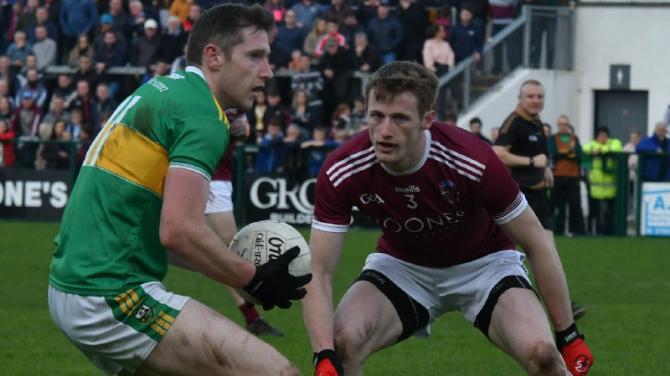 THE draw for the Derry senior football championship semi-finals which took place at the weekend has kept the big two apart.

Slaughtneil,who beat neighbours Glen in a real quality game, will take on Ballinderry, the team they defeated in the 2014 final.

The quick turnover will give little time for injuries to clear up but the last four standing have strong panels.

The dates and venues will be decided in the next few days but most likely there will be one on Saturday and one on Sunday.

These two teams have won seven of the last nine titles between them yet it is a big surprise to see Balinderry in the last four after winning just one of their three group games. That said, when the championship comes around, Ballinderry seem to rise to the occasion and they have reached this stage on merit.

Having beaten Newbridge in extra-time in the first knock-out phase, they got the better of Ballinascreen on Saturday by 2-12 to 2-9 in a thrilling encounter. Quite a few of the Shamrock’s last title winning team of 2013 are still on board and no doubt eyeing another final.

Given the form that Slaughtneil have shown to date they will go in as very strong favourites. In the group games they easily beat Coleraine, Lavey and Kilrea.

Then, the first knockout game was against rank outsiders Foreglen and they negotiated that hurdle easily. When they were drawn in the quarter-final against rivals Glen many thought that it would have made a good final. Last year, Glen beat the Emmett’s in the semi-final but there was to be no repeat at Celtic Park on Sunday.

Shane McGuigan has been excelling in the Slaughtneil attack and if the Shamrock’s are to upset the odds they will have to curb him which is no easy task as other defences have found out. Slaughtneil set out their stall at the beginning of this mini season to win back the title and it is doubtful if the Ballinderry side has the power to stop them.

The champions Magherafelt have shown why they hold the John McLaughlin Cup. They have been winning games while not playing particularly well and not scoring as much as they would like. At the other end of the field they have not been conceding much either.

They won two of their group games against Ballinderry and Magherafelt but lost narrowly to Glen, scoring only 1-5 in that game.

They negotiated a tricky first knockout game with Lavey and on Saturday past beat Swatragh by 1-11 to 0-10. It took a goal from defender Ryan Ferris to take them to a 1-8 to 0-9 victory in the win over Lavey.

The Loup beat Coleraine handily enough on Sunday but the Eoghan Rua side has not been playing well this year and were fortunate even to be in the last eight. Prior to that they had beaten a rookie Dungiven team by 0-21 to 1-11.

Victories, no matter what the opposition is, grows confidence and new manager Paddy Bradley will be pretty happy with the progress of Loup so far considering the injury problems they have had.

Magherafelt, who are very strong defensively, will start as favourites even though they have lost to Loup more often than they have beaten them.

Magherafelt’s counter attacking style with Conor Kearns the conductor is good enough to take them to the semi final. They can stifle the Loup attack led by Anthony O’Neill and the Devlin brothers and get enough scores on the break to reach back to back finals.

These two teams were among the real title contenders from the start but one will be gone after this weekend. They met in the group stages with Greenlough winning by a goal. Both got byes into the quarter finals with Greenlough as a group winner and Castledawson as best runners up.

On Saturday, Greenlough, as expected, beat a young Lissan team on a final score of 0-14 to 1-2. Castledawson were pushed to the limit by reigning junior champions Glack before winning 2-11 to 2-7 at Foreglen.

Castledawson have injury problems but they have a strong record in this championship winning three times in the last eleven years. Greenlough with Joe Cassidy back at the helm also have a good record and with in form Niall Loughlin to lead the attack they should reach the final.

Both these teams lit up the championship with superb team performances at the weekend and now they meet for a place in the final. Steelstown scored 3-14 against Drumsurn and Faughanvale 3-18 against Limavady.

Both play fast attacking football and are good defensively. Limavady were poor against the ‘Vale while Drumsurn were thumped despite having some good periods in the game.

If Faughanvale are to reach the final they will need to curb the influence of Steelstown’s influential Ben McCarron who lines out at left half forward but usually plays in the middle third. Here he sprays the ball intelligently and picks off quite a few scores himself.

It has all the hallmarks of a top class game and it could tilt in favour of the city men given the strength they have on their subs bench.

The quarter finals take place this weekend and in three games there are clear-cut favourites. The one game that is hard to call is at Craigbane on Friday where Magilligan meet Dolans. Both have won two group games. Magilligan finished strongly in their wins over Drum and Moneymore and their superior fitness could decide this one.

Desertmartin will be hot favourites to overcome to overcome Doire Colmcille at Banagher also on Friday evening. The Colmcilles lost their last two games against Dolans and Ballerin. Desertmartin’s only defeat was by a point against Craigbane. It is hard to see anything other than a comfortable Desertmartin win.

On Saturday at 1pm Ballerin meet Moneymore at Ballinascreen and they will be fancied to progress. Traditionally Moneymore have always made it difficult for the fancied Ballerin team and they could do so again. Ballerin are very sharp in attack and should reach the last four.

Craigbane should have little difficulty in getting past the game but largely ineffective Ardmore who are in the process of rebuilding. With forwards like Lee Moore, Fergal Mortimer and Jude McLaughlin it will just be the case of Ardmore trying to keep the score down.