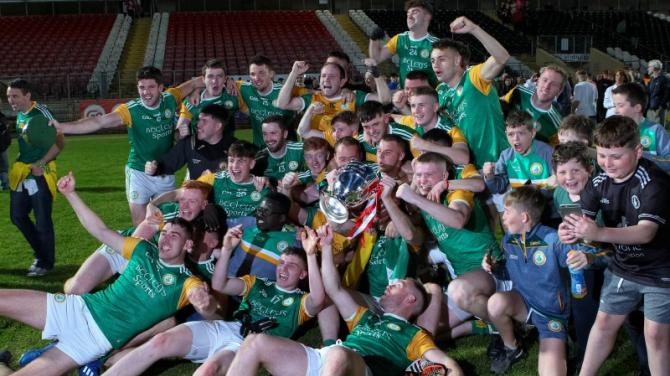 COUNTY final day in Tyrone has produced many memorable encounters, but none can ever have come close to the drama, excitement, tension and emotion that this epic decider contrived on an unforgettable Sunday evening at Healy Park.

Throw in a significant piece of history as well, and this LCC Group Tyrone SFC final had just about everything.

Dungannon Clarkes reached out to banish the pain and torment inflicted by decades of under-achievement and disappointment, rolling back the years to the glory days that few can remember.

Not since 1956 had the club been proclaimed as the county’s premier force, but the O’Neill Cup is back in O’Neill Park following a 64-year absence.

The joy poured uncontrollably and unashamedly as soon as Ciaran Barker rifled the winning kick to the net at the climax of a nerve-shredding penalty shoot-out.

A remarkable run of Championship games had come down to this, and no-one could argue that the Clarkes did not deserve what they had just achieved.

All four ties had gone to extra-time, and in every game they had needed a late equaliser to avoid defeat in normal time.

But on each occasion, they dug deep, working as a close-knit unit to keep themselves on course for that elusive prize as they dragged themselves across the line against Loughmacrory, Ardboe, Errigal Ciaran and ultimately the defending champions.

It seems the Tyrone SFC title is impossible to retain, with the holders Trillick becoming the latest club to fail in their bid to win back-to-back titles.

Not since 2005 have the defending champions held on to the O’Neill Cup, and the St Macartan’s, like so many before them, were unable to buck the trend.

It took two full rounds of penalties – 20 kicks in all – to settle this memorable tie in an historic shoot-out, with Barker nailing the decisive kick.

Paul Donaghy, who converted both of his penalties, admitted that it is a cruel method of deciding a major title.

“It’s a tough thing to do, and it is a horrible way for Trillick to lose it,” he said.

“If we had lost that, I’d say we would have been doing some complaining about the whole system of it.

“Anybody can miss a penalty on any given day. You’ve just got to step up and hit it.”

Donaghy, who also claimed the Championship top scorer award, the Patsy Forbes Trophy, added: “It’s nice to come out the right side of it, nice to come through games the way we always do. We’re happy enough just to take the cup back to Dungannon.”

Lee Brennan opened the scoring from a 45-metre free in the fourth minute, and Dungannon had an opportunity to equalise from a similar position.

Ciaran Barker, who sent them through to the decider with a last gasp semi-final winner from a ’45, saw his kick come back off post.

But Trillick, with Rory Brennan repeatedly raiding from deep, settled into a comfortable rhythm, and had the Clarkes defence under sustained pressure.

David Walsh, Ciaran Barker and Sean Molloy, along with the busy Ryan Jones, turned them back as they moved the ball looking for the shooters, but the lead was doubled in the 23th minute when Lee Brennan nailed another free.

And two minutes later, he struck gold with a well-worked goal. The build-up was patient and well constructed, and it was Niall Donnelly who provided the final pass for Lee Brennan to arrive at pace on his shoulder and beat Daire Martin with a firmly struck shot.

It wasn’t until the 23rd minute that the Clarkes managed to get off the mark, having been frustrated by a well-organised Reds defence up to that point.

Full-forward Patrick Molloy was the man to hit the target from long range, but the score was cancelled out as the St Macartan’s raided again for Ryan Gray to send corner back Gavin McCarron in to split the posts.

But the Clarkes were beginning to find their feet, and when Molloy sent a 40 metre free between the posts, their supporters were finding their voice.

Trillick took a 1-4 to 0-3 lead into the interval, but the Clarkes wasted no time in chipping away at the deficit.

Paul Donaghy, held scoreless in the first half, steered a 45 metre free between the posts, and added another from play to narrow the gap to two, with the dynamism and workrate of Mark McKearney having a huge impact.

Trillick only managed a Lee Brennan point from a free in that spell, during which Paddy Quinn came off the bench to make a massive impact.

Padraig McNulty arrowed the perfect pass in his direction and he flashed over a point with his first touch to raise his side’s confidence still further.

And in the 44th minute, Quinn was in the right spot to collect Paul Donaghy’s long delivery when Ruairi Kelly failed to hold on, and he smashed the ball to the net for a crucial goal.

But the inevitable Trillick backlash wasn’t long in manifesting itself, and with Rory Brennan, Mattie Donnelly and Liam Gray making the hard yards.

Lee Brennan fired over a free and a ’45, and Gavin McCarron was desperately unlucky to see a shot come back off the butt of a post, after he was sent clear by Ciaran Daly.

They continued to ask questions of the Dungannon defence, and while David Walsh, Conall Devlin, Mattie Walsh and Ciaran Barker rose to the challenge, the Red wave just kept rolling.

Daly and another substitute, Niall Gormley, sent over points, and now the champions led by two with just a couple of minutes to play.

But as they had done in all their previous games, the Clarkes players held an unconditional trust in each other, and searched deep into their hearts, where they knew they would find the resilience to overcome adversity once again.

Barker, with a nerve of steel, kicked another long-range free, and Kiefer Morgan, who had been tormenting the Trillick defence since his introduction, landed a mighty point in stoppage time to send the game to extra-time, tied at 1-9 to 1-9.

Off went the champions again, Brennan and Daly on target, and as they continued to press, hoping to break their opponents’ resolve, they ran into trouble in the form of Barker and the brilliant McKearney, a non-stop inspiration throughout the game, along with Dalaigh Jones and Ryan Jones.

Morgan and Donaghy pulled it back to level terms again at the turnaround, and in the second period of added time, Quinn and Brennan swapped points, and with possession so precious in the nerve-shredding closing moments, neither side could find a winner, and it ended deadlocked at 1-12 to 1-12.

And so it all came down to the dreaded penalty shoot-out. Almost inevitably, that finished level after the allotted five kicks each, at three each.

So the five nominated penalty takers had to go again, but now it was sudden death.

It went right to the wire, and with Trillick having missed their final kick, it came down to Ciaran Barker to nail the winner, and he did so in style, smashing his spot-kick into the net to send the Clarkes players and their supporters into joyous raptures.