Eight Titles in a row 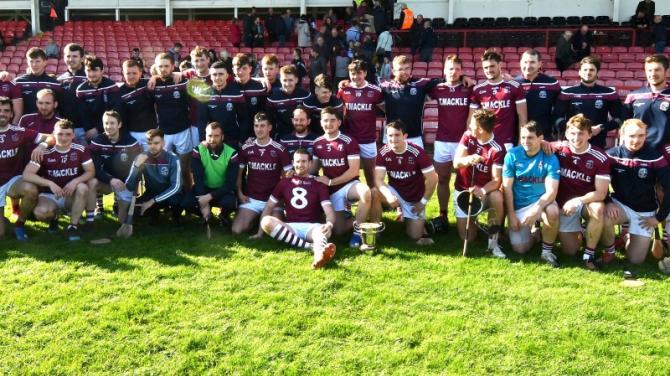 SLAUGHTNEIL continue to break records - even their own. They were first to a straight seven and now it is a straight eight!

Slaughtneil made it eight Oak Leaf county crowns in succession in Celtic Park on Sunday with a 12-point victory that became a second-half victory procession for Mickey McShane's team against a Kevin Lynch side who ran out of steam after the break.

Geoffrey McGonigle's men were excellent in the opening half, putting in some huge hits to force the champions back but, backed by a considerable breeze, they shot far too many wides and ultimately had no answer when Slaughtneil turned the screw after half-time with the wind now at the champion's backs.

The first half was one of two quarters, with the water break - fast becoming one of the least welcome additions to Gaelic games - once again dictating a momentum swing that worked against the team who had been in the ascendancy.

Lynch's had started superbly with Eoghan Cassidy magnificent as they tore into the reigning champions. Every tackle had the intensity of a team wounded by seven years of watching their biggest rivals lift the county crown.

That breeze swirling around Celtic Park was in Lynch's favour but the opening 16 minutes were not about the elements, they were about Lynch's getting a foothold in the game, something they managed as they built a 0-6 to 0-2 lead.

The champions were relieved to see the water break which would have been more about getting reorganised rather any need for re-hydration.

And sure enough, Mickey McShane used the time wisely, Slaughtneil re-emerging from their huddle to outscore Lynch's 0-5 to 0-1 for the remainder of the opening half.

After the break, the champions found their stride with the elements to outscore Lynch's 0-16 to 0-4 in the second period, and it was every bit as emphatic as that sounds.

The champions had their goal chances but they didn't need them, they won this one from a long way out, and they must now hope the GAA will reconsider the decision not to hold the provincial and All Ireland club championships.

“Second half we pulled away and the last 15 minutes were pretty straightforward but it wasn't straightforward in the first half,” admitted Slaughtneil manager Michael McShane.

“To be honest, that's when we won that game - the effort the lads put in throughout that first half was incredible.

“Kevin Lynch's tackling was fierce, very, very hard hitting, but all very fair and within the rules of the game and we had to stand up to it.

“We don't do panic. We have been in that position before. We talked about this over the years and all you do when you are behind is you have to work that bit harder, maybe make a few changes, tactically or positionally. You have to start working harder and bring yourself back into the game. Nothing beats hard work.”