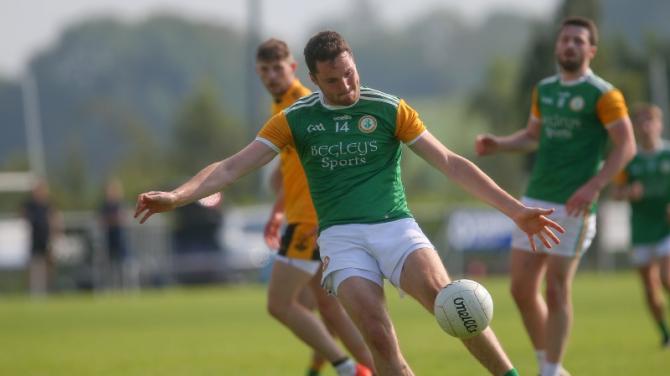 DUNGANNON Clarkes will attempt to capture the greatest prize in Tyrone GAA when they appear in the LCC Group Senior Championship final on Sunday, confident they can take that final step and win the title for the first time since 1956.

The O’Neill Cup decider against Trillick is a massive occasion for a club that has made huge strides in recent years, and now hopes to be confirmed as the best in the county.

Healy Park will be the focus of attention on Sunday afternoon as the Clarkes make their first county final appearance in 34 years.

It was Trillick who also provided the opposition back in 1986, coming out on top at Plunkett Park, Pomeroy.

Unfortunately for the hordes of fanatical supporters of both teams, numbers attending the title decider will be severely limited due to Covis-19 restrictions, but the game will be streamed live into every household and to ex-pats all over the world.

It has been a whirlwind season for the men from O’Neill Park, with a talented and exciting team setting its stall out in the early stages of a campaign delayed by the public health emergency.

An unbeaten run in the League was followed by a breathtaking Championship series which has seen them win all three games in extra-time.

And through it all, the players have grown in stature, developed their confidence and built incredible levels of resolve.

It all started at Pearse Park, Galbally, where team captain Padraig McNulty’s late equaliser rescued the Clarkes and brought an added 20 minutes of action, which Dungannon dominated to run out 2-23 to 2-13 winners.

A quarter-final thriller against Ardboe also went to extra-time, and once again they needed a late leveller in normal time, this time from Paul Donaghy, to stay alive in the title race.

And they came through that cliffhanger with a 0-23 to 2-15 result, thanks chiefly to a remarkable display of finishing from Donaghy, who scored 14 points.

It was last year’s beaten finalists, Errigal Ciaran, who provided the semi-final opposition, and yet again a late equaliser was required from Patrick Quinn to extend another thriller, with corner back Ciaran Barker emerging as the hero as he converted the winner from a ’45, sending Dungannon through to the decider on a 0-19 to 2-12 score-line.

Dungannon manager Chris Rafferty is relishing the opportunity to reverse the outcome of the last final the club was involved in, with Trillick providing the opposition back in 1986 as well.

“It’s no secret that they’re the team that beat us in 1986. Terry Loughran, who is the manager with me, was the captain that day, and Liam Donnelly was the captain of Trillick that day,” he said.

“There’s an awful lot of history between those two gentlemen. It broke Terry’s heart, we don’t want another broken heart.

“And equally so, Trillick will be looking at the 2014 Intermediate Championship final, where we had the better of the encounter, and they will use that as a focus to make sure that they don’t take anything for granted.”

Rafferty has watched his players dig deep to carve out victories after extra-time in all three of their Championship games this season, and he has faith in the resilience of his players.

“The credit goes to the players and the way they go about their business.

While this Sunday’s county final will be a new experience for each and every one of the Clarkes players, they have a man in the backroom team who knows all about preparing for big occasions.

Team trainer Collie Holmes won three All-Ireland titles with Tyrone, and his experience of the heady days of the noughties will be invaluable in guiding the Dungannon squad through the build-up to this weekend’s title decider.

“There’s no hiding the fact that we would not be in this position without Collie Holmes,” said Rafferty.

“His training is exceptional, his mannerism, the way he conducts his business, the approach to football, are all massive positives, and we’re happy to hoover it up from him.

“He has had success as a player, I was fortunate enough to play with him at Queen’s. He went on to have a very impressive inter-county career, winning three All-Ireland medals, countless Ulster medals.

“He has been in a club final in Armagh and on top of that as a manager he has had an All-Ireland success at U17 level.

“So if you can’t benefit from that wealth of experience, you’re not paying attention.”

The format of the Tyrone SFC, which, unlike many other county Championships, is still played on the traditional straight knock-out basis, makes for fiercely competitive games, and it is without doubt the best series in Ulster.

The Dungannon manager is now reaping the rewards of a solid youth policy which has been helping the club to develop and grow over the last decade.

It has been a story of recovery for a club that went through a serious slump back in the noughties, slipping down through the grades to become a Division Three outfit.

But the recovery has been carefully choreographed, and skilfully designed as the Clarkes rose again to renew its status as one of the county’s leading lights.

“We come from a town, but we are a community, and we’re as much in love with our football as any other club.”

And the lure of other sports has posed additional challenges to efforts to harness the top talent in the area.

“We are like most town teams, we have a very competitive soccer set-up, a big rugby team, there’s a lot of competitors for the hearts and minds of the children.

“And we want to put our product, for want of a better word, out and maximise it, and show people that this is what we do and this is how we do it, that their children are welcome and we would like them to be part of it.

“Our semi-final was shown on RTE, and from that point of view, it’s fantastic, because it gives us exposure that we wouldn’t normally get.”

Rafferty also extended his best wishes to neighbours Edendork, who appear in the Intermediate Championship final on Saturday in which they take on Gortin at Healy Park.

“I want to wish Edendork all the best. We are neighbours and we are rivals, but we all went to the same schools, we all live in the same area, we all have the same desires and aspirations.

“And I hope they have as much success as possible on their day.”