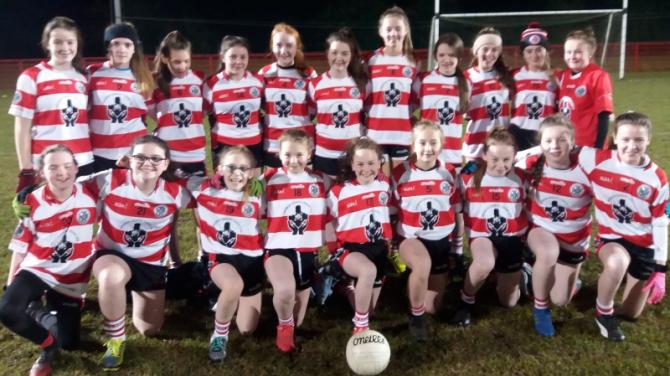 THE Moortown U14 girls began life in Grade 1 in the best possible way, claiming a hard fought victory against a determined Errigal Ciaran side on Friday night.

Right from the off, both sides attacked each other and it was Moortown's greater ability to get scores that proved pivotal.

Early first half points from captain, Emma Murphy, Rachel Tallon and Donica Ryan got them off the mark although Errigal did reply with two well taken points of their own.

Mia Crozier in goals was accurate with every kickout and the full back line of Aoife Doris, Emily Conlon and Cara Hagan stood strong, not giving their markers an inch. Rachel Tallon then kicked two frees and a couple more from play, however, the vital score of the half was Donica Ryan's goal, just before the interval, leaving the half time score Moortown 1-9 Errigal Ciaran 0-3.

Credit to Errigal for starting the second period strongly as they scored two early goals to cut the lead to three points.

It was time to dig in and the loughshore girls relied on half backs Cara Quinn, Saoirse Quinn and Chloe Lavery who did just that, breaking down further attacks and getting Moortown going in the opposite direction.

Wing forwards Sinead Kelly and Leah Kelly suddenly got more involved, as did inside forwards Ellen Coyle and Cara Gilligan. At midfield, the energy of Brianna Vincent proved vital as she got on the ball and helped carry the attack to Errigal.

Further scores from Tallon, Murphy and Ryan followed as Moortown stretched their lead to eight points.

The defence was rock solid for the remainder of the game with keeper Mia Crozier continuing to be extremely accurate from kick outs and Emily Conlon and Saoirse Quinn were colossal.

The strong running of Emma Murphy, Rachel Tallon and Brianna Vincent helped create the openings and a brace of goals from Murphy settled the outcome on a 3-16 to 2-6 scoreline.

No doubt there will be even tougher tests ahead for these Moortown girls, however, this was a great start to their campaign.