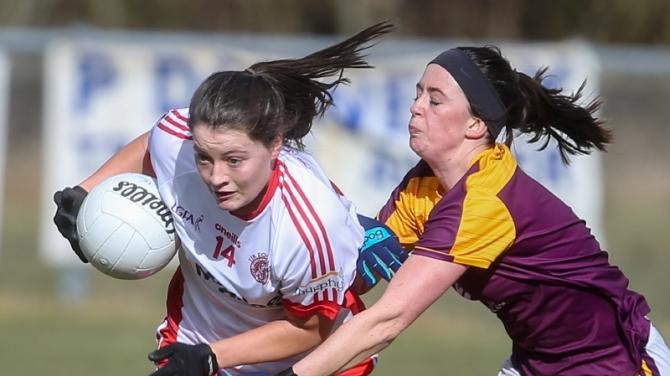 THE Tyrone Ladies secred a resounding victory over Wexford to pick up two League points at Augher, bouncing back strongly from a heavy loss to Kerry in their previous outing.

They displayed strength of character to put in a solid performance with plenty of style to complement the substance, and their finishing was of the highest order.

A 26 points margin was in no way flattering to the dominant home side as they laid on a positive and clinical attacking display.

The result kept the Red Hands’ hopes of qualifying for the NFL Division Two final alive, but they cannot afford to drop another point, and will also hope others can do them a favour.

“We have nine points now and have improved our scoring too, we are safe of course but want to still try and press for that league final,” said manager Gerry Moane.

“We have two big Ulster games to go and we still have a chance although we know it will be difficult.”

Moane was delighted with the attitude of his players and with the quality of the football they produced on the day.

“We were always in control, we had a lot of scorers, could have won by more but we will take it.

“I was happy that players got game time too, these players wanted to show us what they can do too.”

Tyrone face Monaghan and Cavan in their remaining games, and must take full points from both.

Moane is still irked by a disappointing defeat to Meath in the opening round of the campaign.

“If we played them tomorrow we would beat them, We missed out that day and that’s annoying for us but look we are still in the mix and that’s important with two games to go.”

The Red Hands had the game virtually out of sight by the end of the opening quarter as they raced into a 14 points half-time lead.

Wexford goalkeeper Leanne Delany made a number of saves to prevent even more damage being inflicted by a hungry attacking unit, with Emma Brennan, Niamh O’Neill, Grainne Rafferty and Emma Brennan all going close with goal attempts.

Tyrone’s first goal came after ten minutes, a well taken strike from Rafferty, while Brennan and Chloe Mc Caffrey struck some excellent points, four each for the pair in the opening half.

And soon after the restart, Niamh O’Neill fired in two goals and steered over a neat point as the Red Hands pulled further clear.

Rafferty, Emma Jane Gervin, O'Neill and Brennan added points, and Caitlan Kelly grabbed a fourth goal late on to pile on the punishment for an outclassed Wexford side.

Tyrone are still in contention for qualification for the League final, but it’s out of their hands and they are depending on other results going their way.

But the Red Hand girls must keep their side of the bargain by defeating Cavan and Monaghan.